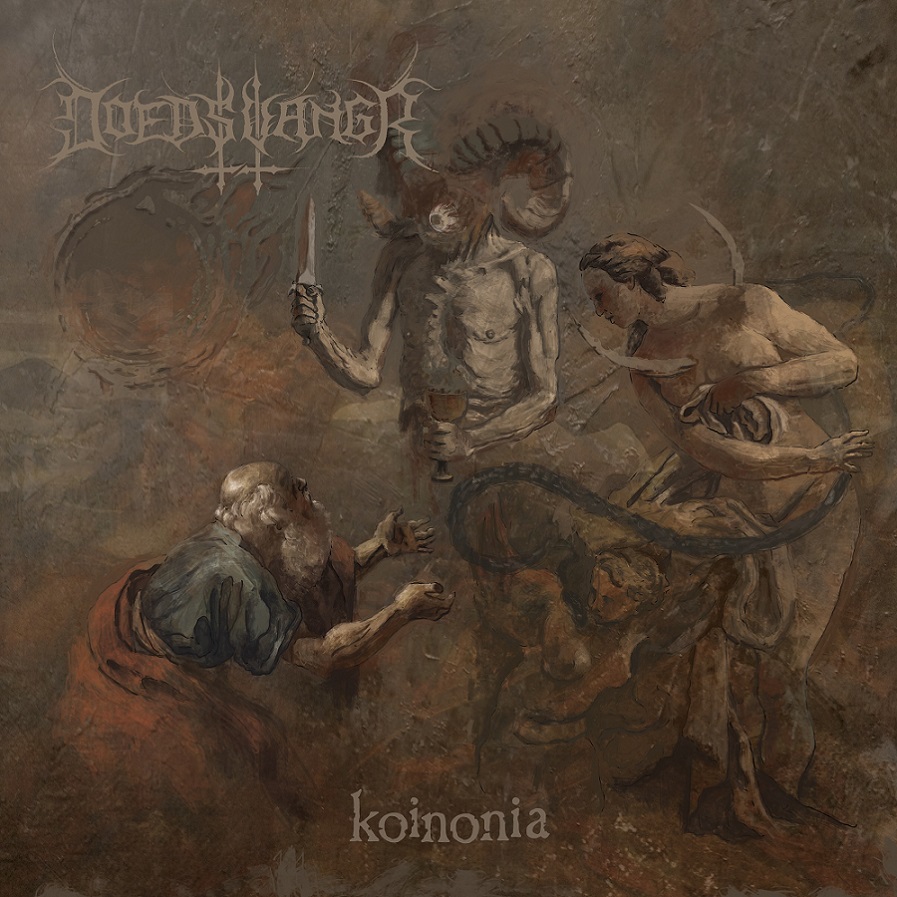 Straight after the release of their 2021 sophomore album ‘Serpents ov Old’, Doedsvangr didn’t rest on their laurels and come straight with an EP entitled ‘Koinonia’. The EP, available digitally and on vinyl courtesy of Devilry Productions, features three brand new tracks spanning 11 minutes. On the vinyl edition, meant to be sold at live shows, we can also find a cover version of a The Ramones track, ‘Anxiety’. And talking about covers, the EP is adorned with spectacular artwork too.

The opening track of the EP, ‘Lord ov Pits’, has a slightly more dissonant and unsettling character to it than the songs on their previous album. Vocalist Doedsadmiral further improves his varied performance from ‘Serpents ov Old’, and at times reminds me of Funeral Mist and Marduk vocalist Arioch/Mortuus. In fact, ‘Lord ov Pits’ does have some overlap with Funeral Mist at times, and perhaps the influence of guitar player BST’s background in Aosoth is audible in the track. ‘The Drewl from their Mouths’ opens furiously and sounds very much in line with the Scandinavian Black Metal of the preceding album, with Finnish groove and melody and Norwegian aggression. Finally, ‘Breath of Rats’ has a slightly more trance-inducing ring to it, and feels like an extension of the track ‘White Finger’ that was featured on ‘Serpents ov Old’. Three songs that are similar, yet each bring something different to the table.

In a lot of ways, the new EP is a logical continuation of ‘Serpents ov Old’. It has the same blend of Scandinavian Black Metal that Doedsvangr had crafted on their sophomore album, but with a slightly more dissonant character to it. It’s exciting to see what direction Doedsvangr will take with their next full-length album. (VincentP)

Who doesn’t love their black metal served with a generous helping of the occult with a side of satanism? Throw in some stunning artwork from Khoas Diktator Design and you have the latest EP from Doedsvangr entitled ‘Koinonia’.

Initially made up of three infernal anthems, which starts off with blistering and unrelenting fury which continues into the highlight track for me ‘The Drewl From Their Mouths’ and there is not a moment rest throughout this release, it’s short, savage and commands your full attention.

There will also be a vinyl exclusive – a cover of The Ramones track ‘Anxiety’. (Rick)