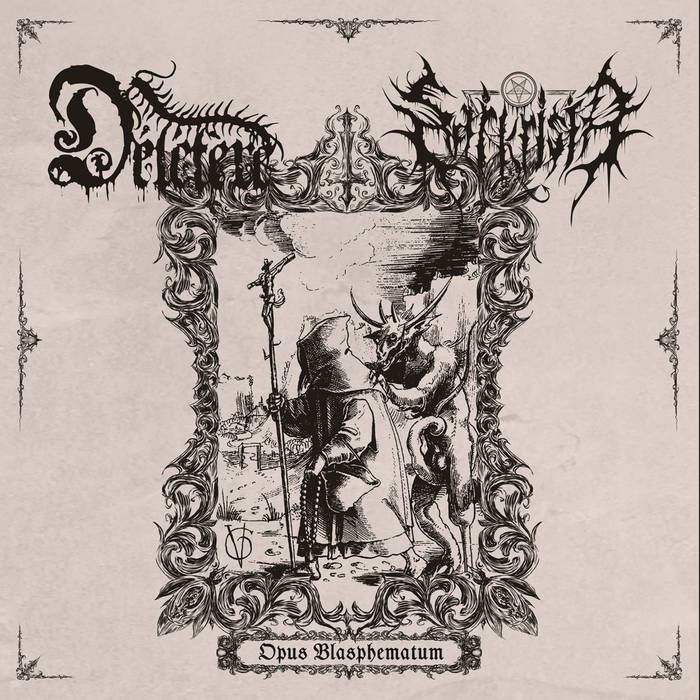 An artist who allows his thoughts to be spilled forth onto the canvas can create wonders in a myriad of colors for he is the sole creator, the one who dictates the flow of the brush and the emotions that which must be brought forth, but if you were to introduce a second mind into this creation, the world that is birthed may not reflect that from whence its spark was singularly conceived, for now the canvas must bare itself before two entities. The result can be a monstrosity where conflicting ideologies warp in and out of each other, tearing at the seam, or, they can be as docile as the silent wind that courses through the field of green, not a stir of motion to be felt, in other words, the so-called splendor that was painted beckons naught any melody nor mirth to its colors.

This brings us to the most recent release, ‘Opus Blasphematum’, a split forged by unification of both Délétère and Sarkrista. There are many ways in which these tracks could have unfolded, for its unveiling could have been a mere platform for both bands to showcase their musical prowess, however, while the split does achieve this aspect, it is the amalgamation of both individual vessels that fuse to form a cohesive yet unique listening ritual. As an album, ‘Opus Blasphematum’ is draped in a candor of meritorious facets, as the soundscape can be compared to that of two authors whose words blend into one another where each stanza compliments that which was written before culminating to a crescendo where words flow like an untempered river along the rocks and coiling paths where its strength never recedes and its course remains unhindered. To me, personally, this is the beauty in which this split bestows to the listener, as the composition of the songs weave into each other, even though its aura may differ, but the underlying spirit which resides within becomes the sinew which binds the tracks into one body.

Even though the description may seem rather ‘graceful’ per say for I did call the split ‘beautiful’, I do not mean beauty in terms of luminous vanity rather it is like flames whose sparks yearn to taste the heavens as they dance and lick the skies in a macabre yet abstract way, but the same flame that radiates a sense of magnificence can also swallow a forest with its virulent movements.

For instance, Délétère’s  three(3) tracks upon the release expels a rather nature-like element which is fostered by the riffing and percussions, take for instance the tracks such as ‘Seule affamée’ and ‘Verminanda’, where the rhythmic structures exudes an earthly yet potent feeling that entices the senses of the listener. This is due to the production, while not inhibited in a complete raw manner, it accentuates the overall atmosphere that has manifested by Délétère, for upon hearing the composition of the strings at times combined with the mix, and the listener is granted the illusion as though torrential downpour impinges upon the earth. While Délétère’s musical architecture follows that of Atmospheric Black Metal at times, it is the subtle nuances that clings to the resonance of the strings.

If Délétère represented that which the essence of nature is bred from, an entity whose melodies can bring forth fertility to the womb of a barren land, and from its soundscape drape its atmosphere with its orphic notes like that of the wind which meanders along the forest line acting as the tongue of such wonder…then Sarktrista would be the juxtaposition to this ethereal spirit, for the sounds that echo forth fashions itself into a malevolent aura that transmutes the very energy expelled from Délétère into a weapon of stygian sound. The very atrament bled from the veins of Sarkrista is enough to bring blight to a lush forest as it sours and twists the womb of the earth, for even though this may seem appalling, its quite enthralling to be honest, the fluctuation of  where the ambience of this release transfigures itself betwixt the point of serenity and chaos. Tracks such as ‘Psalms of Impious Malice’ and ‘Sermons of Burning Blood’ are testament to the weaving of these curses conjured by Sarkrista, for the motion in which the strings and percussions adopt exudes a rather organic candor to its playing, the stripped and naked production accentuates the rawness of the frenetic riffs granting to it a rather potent atmosphere. The vocals however becomes the force that shapes these energies, like he who commands the flame to take form, so too does the tongue of Sarkrista serve in its uttering of these spells, but the crux of the performance is not the register that is chosen nor the malefic tone, rather it arrives from the power it captures, for the words uttered feels rather occult-like as though it can a turn a chalice of wine into writhing worms from its incantation.

If one craves a musical experience where the energies spiral into a monument that is never cemented in its structure, for its language of motion is forever fluid in its serpentine movement that weaves in and out of the aura where nature and an aphotic entity dwells, ‘Opus Blasphematum’ would become that vessel which ushers one’s senses into a ritualistic journey.