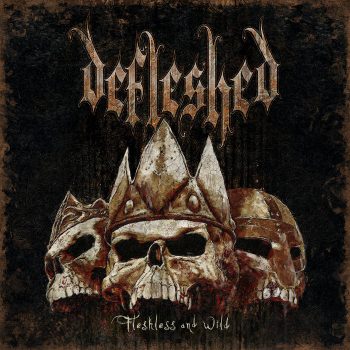 After a career of almost 15 years, Swedish Death/Thrash band Defleshed threw in the towel in 2005. Up to that point in their existence, the band had released five full-length albums and several EP’s/demos and were a welcome guest on European stages. With their no holds barred ultra-fast Death/Thrash, Defleshed was always one of the proponents of this sound and proved to be one of the best acts that was able integrate both genres with none of them necessarily gaining the clear upper hand over the other. However, the band never enjoyed the great success they might have hoped for, or perhaps even deserved.

2005’s slightly lesser ‘Reclaim The Beat’ was the last we heard from these Swedes. Until the band recently announced they had risen from their ashes. Their first feat after their return, which should also serve as a preview for a new album, is this 7″ EP that sees the light of day via Regain Records. And despite the thick nod to Accept, this is no cover of this German Heavy Metal icon. What we get to hear is unadulterated Defleshed. Full-on Death/Thrash without frills. Despite the fact that the time the band was away lasted longer than they had actually existed, that is absolutely not to be heard on this 2-track EP. The band sounds fresh, fierce and inspired, something that far from all bands returning after so many years manage to avhieve. The title track is catchy (so in the end still has something of Accept about it) and seems perfectly suited for a live setting. On the B-side, we find ‘Night Vision’ which is perhaps slightly less catchy, but is delivered with such dedication and conviction that it is perhaps even better than ‘Fleshless And Wild’.

Although this EP marks a welcome return of Defleshed, this release, like any upcoming album, will most likely not change the band’s position and status. If I can assume that the album is of a similar quality to this 7″ EP, I personally don’t give a flying F. When you close your eyes and play these two tracks, it’s as if time has stood still. Welcome home.