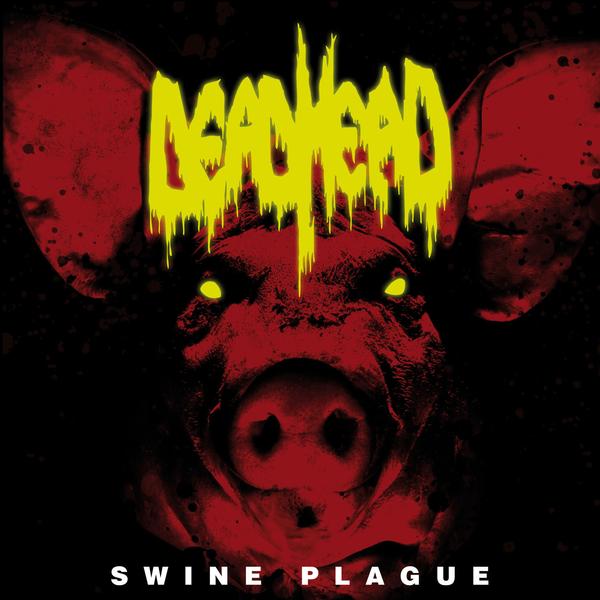 Well, what can I say. The last two Dead Head albums were entertaining yet neither of them came close to their first three masterpieces. But do remember, Haatland did have ‘Mesfeken’ and ‘Dog God’ which are tough songs to beat! The Haatland album as a whole though was a bit formulaic and follow-up Depression Tank suffered from lack a classic songs. The latter issue has been set straight with their newest album ‘Swine Plague’. The first matter, formulaic writing, is still a bit obvious here unfortunately. What is formulaic is the fact that most of the fast songs all seem to have a slow part in the middle. However Swine Plague easily surpasses Haatland when it comes to the actual amount of quality songs. If you liked the utterly neurotically played fast thrash on The Feast Begins At Dawn as well as the earlier mentioned post-Y2K songs like Mesfeken and DogGod, you’ll have no issues enjoying Swine Plague. Hyperactive drums, effective furious riffs, blistering solos Slayer-style and Van Dijk screeching his old school Petrozzaish pipes. ‘Helhuizen’ is one of their best openers ever since Kill Division. And just wait until Van Dijk shouts ‘Hell’ at the 2:19 mark. This has Venom/Cronos written all over it! But things even get better. Second song ‘Dühr’ in my humble opinion is simply one of the best Dead Head songs ever. The opening riff is so damn heavy and despite the song speeding up, that opening riff comes back several times throughout the song to keep the tension, atmosphere and cohesion. I kept on mumbling the ‘Walking among us’ and the supporting riff for several after days having heard this song a few times. It tells you enough how catchy riffs-versus-vocals work on the album. Another one of the best songs here is ‘Fortress of Greed’. I don’t know how many of you remember the Dutch thrash metal band Abacinate (which unfortunately never got to release an actual album) but the opening measures to ‘Fortress of Greed’ really has their vibe. Also in this song the interaction between riffs and vocals work perfectly. That Abacinate-riff accompanied with Van Dijk shouting ‘The mirror Shines’ lter on in the song is also another one of those moments that keep resounding in my mind for hours after I heard the album. Just like the intro of ‘’Last Server Down’ on Haatland this album also has a song intro which pays tribute to the Steer/Amott days of Carcass. We’re talking about ‘Eternity Destroyed’. However after the into the song involves into one of the most obvious Exodus/Slayer influenced thrashers on the album. Although clocking in at 5 minutes (being the longest song on the album) it remains a solid thrasher till the end. Riffs and especially vocal lines have a huge Exodus atmosphere. Catchy chorus too. In terms of fury the fastest song here is ‘the Awakening’. Funny thing is a few of the riffs and the effective assault here do actually remind me of Merciless (Sweden) on their ‘The Awakening’ album (1990). A very, very strong old school thrasher. If that’s not enough and you really, really want to relive that typical 1990-1991 DeadHead vibe, you HAVE to check ‘Day of The Devil’. It’s all there, the typical Saved By Science meets Rites Of Kandar type of riffs and those hyperdrums hitting as if the band were 21 again. So, this is a perfect album then? After the hits, here are the ‘misses’. Just like the Haatland song ‘Faust II’ the Swine Plague song ‘The Gates Beyond’ is one of those songs that had the potential of becoming a Dead Head classic. After 30 seconds probably one of the coolest Dead Head riffs EVER comes in. You have to hear it to believe it. However, after 1:37 fun is quite over. The song speeds down and at 1:52 some Slayer riff from the GodHatesUsAll era takes over. And it isn’t until 3:56 the songs gets its balls back. And then there are two other lesser glorious songs: ’13 Close’ easily is the worst on the album: I has a few fun riffs and vocal lines but way too many modern conceited riffs and breaks. DeadHead doesn’t need that. ‘Spanish Horse’ is slightly better, angrier and more coherent than ‘13 Close’ but still a very flat song compared with the rest of the album. So all in all, can 2,5 lesser songs ruin an otherwise perfect thrash metal album? Nah, of course not. Even Ride The Lightning had ‘Escape’ so what the hell. Easily the best DeadHead album since… well, 1999. Welcome back, best thrash band The Netherlands have ever seen.