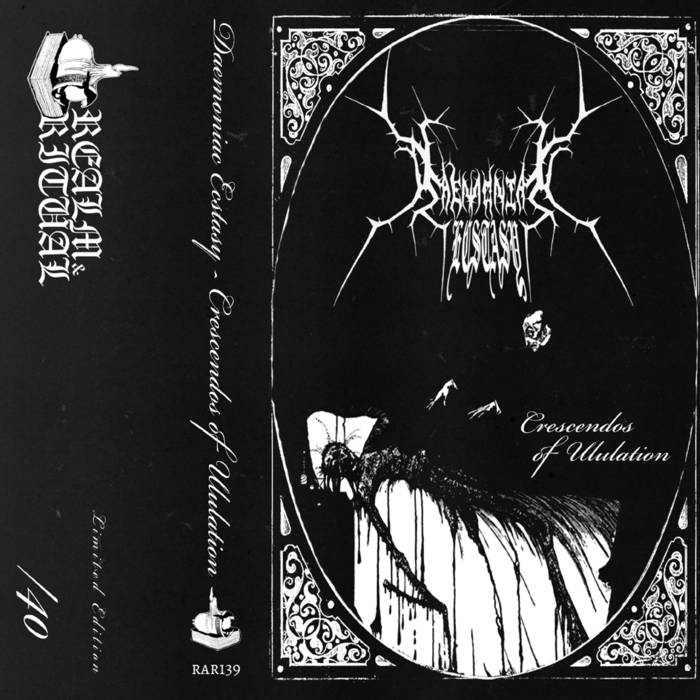 What we have here is another fantasy-drive one-man act from the USA, Pennsylvania in this case. It is astonishing to realise that I am reviewing multiple American one-man acts each week. But most of them are quite good, so I am not complaining. This one is led by an person who goes by the name of C.H. (Coryn H. Wood) and presents this first recording in the form of a 4-track demo tape, released by underground purveyor Realm & Ritual.

First of all, that title, ‘Crescendos Of Ululation’. That makes you wonder. Ululation is a form of vocal expression, mostly used in some parts of Africa, the Middle-East and southern Asia. It is produced by a long stretched, high pitched and loud vocal sound which gets vibrated by a rapid movement by the tongue. Mostly it is performed during certain ritualistic or emotional events, maybe you’ve seen it on new flashes when (mostly) woman perform ululation over victims of, for instance, suicide bombs in the Middle East. Connect that with ‘crescendo’, which is a musical term for a certain sound-pattern to get increasingly louder. If you add those two musical concepts together, you will get a somewhat strange and increasingly loud screaming sound. As I write this I’m still quite puzzled about what it has to do with the musical content of this demo tape.

Which is pretty interesting, actually. The demo opens with a rather standard Black Metal setup: raw guitars, raspy vocals, fast paced drums. It takes until halfway through the first track before it gets really interesting. Then the melody comes in in the form of keyboards and piano, which from then plays an important role in the further course of this demo. The use of melody and piano in Black Metal is not particularly special, but Daemoniac Ecstasy actually incorporates some ‘happy thoughts’-kind of melodies that do make you wonder. It is working much better on the second track, ‘Through Dull Dragging Years’. It might be that this is just a superior song or it could also be that I am getting more used to C.H.’s way of composing. At least it is quite original and interesting, it does remind me on quite some Scandinavian bands from the late 90’s that pushed the boundaries of the Black Metal scene back then. It is bands like Diabolical Masquarade and even some early Dimmu Borgir that can be mentioned as closest comparisons, but at the end of the last track, ‘Satan’s Sorrow Part II’, I even hear a slight resemblance to classic Rotting Christ and Varathron.

I am quite intrigued with this ever flowing stream of bands in this particular Black Metal niche; young musicians creating dark and fantasy-driven Black Metal and mostly on their own. Daemoniac Ecstasy perfectly fits in this whole new movement and I dare to say that all of these young bands together are creating quite an interesting own musical identity. But, after having listened to this demo quite a few times now, I am still puzzled about that whole Ululation thing…