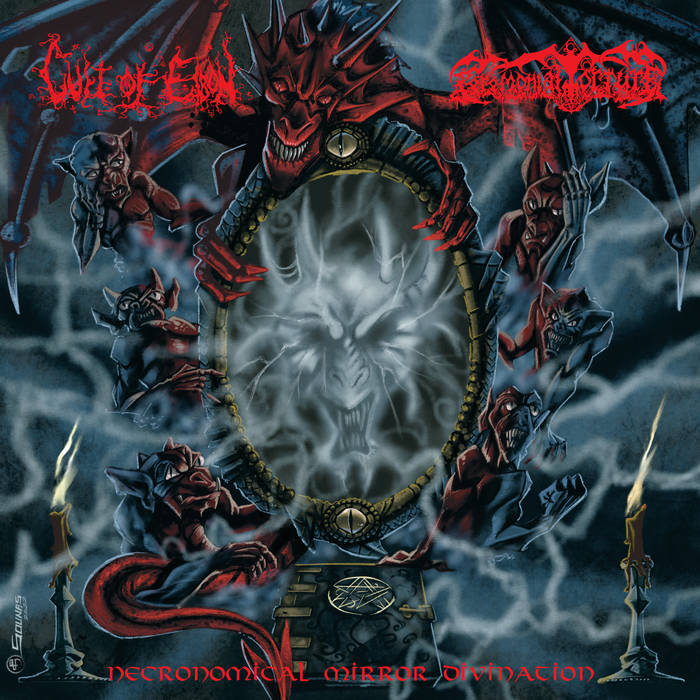 At the very end of 2022 Iron Bonehead Productions treats us with one of the label’s best releases of the year. While both bands might not quite be the most appealing bands on the immense roster of the German label, it was highly anticipated by me. As a big fan of the ancient Greek Black Metal sound, I try to scoop up everything that remotely sounds like all those bands from the glory days of the Greek extreme metal scene. Cult Of Eibon easily is one of the best bands in nowadays Black Metal scene that hails their native roots and this time they teamed up with Finnish one-man Black Metal act Ceremonial Torture. While a little more prolific than their Greek split partners, the band never reached the pages of VM-Underground before.

Cult Of Eibon’s four tracks are everything but surprising, they are offering exactly just what you were expecting. In fact, they again follow just the very same musical recipe as they have done on all of their previous releases. But that may be a little too short-sighted, because to the good listener, a clear progression can indeed be discerned. The musical concept may be unchanged and it is followed almost religiously, but the Athenian duo also able to further refine and perfect it with each release. By now, they have reached a point where the authentic sound is so close to the original that it is almost impossible to tell apart. On these four tracks, they sound even more like the perfect mix between Varathron (‘His Majesty At The Swamp’) and the early work of Thou Art Lord. The mesmerising riffs and melodies enter into a sort of ritual dance with the semi-grunts and together with the dynamic drumming and perfect production are blended together excellently.

The three tracks on the B-side of the vinyl are for Ceremonial Torture, one of the musical vessels of its sole member Goatprayer Doom Predictor (predominantly known for his work in Witchcraft). On Ceremonial Torture’s previous work, Goatprayer Doom Predictor managed to strike a good musical balance between the same Greek grandmasters mentioned above, early Samael and the more basic Finnish Black Metal of, say, Barathrum. An eclectic mix that coalesces into a creative and occult sound with mesmerising effect. On these three tracks, Ceremonial Torture sounds a bit rougher than on the debut album ‘Sabbath, Thou Arts’, released in 2021 (Behest/Out Of The Dungeon). Rougher in sound, where even some of his Witchcraft reflexes tend to shine through, but also definitely less polished in song writing. Whilst sounding more coarse and rugged, it still goes remarkably well with the creative use of keyboards and unorthodox melodies.

Although both bands do have different backgrounds, they do share the same sort of musical view and the expertise to craft those necromantical songs with quite minimal resources. To top off this great piece of team work, it is decorated with some absolutely amazing artwork, that basically breathes the very same authenticity as the music. This is obviously a collaboration forged in Hades.