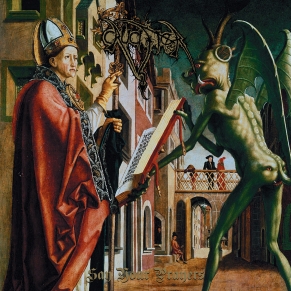 American Black/Death metal outfit Crucifer needs little to no introduction, having established themselves as a well known cult entity in the underground metal scene since forming in 1990. Despite this, the band’s material was only available in limited demos and EP’s until their 2003 full length debut, ‘Stronger Than Passing Time’. Four years have passed since the last album (‘Thy Sulfur Throne on High’) and it is time for Crucifier to resurrect their hellish duties with their latest mCD, ‘Say Your Prayers’.

Clocking in at under the 30 minute mark, Crucifier pushes their pedal to the metal with absolutely brutalising force. If you are a fan of their previous efforts, I promise that this one will not disappoint! The stand out track is easily the second, entitled ‘Foul Deeds Will Rise’, a primitive slab of putrid Death Metal filth lined with influences of Traditional and Thrash Metal. The guitar work on this song in particular is fantastic, with layers of melody without overdoing it and still coming across as vicious. The vocal stylings of vocalist/drummer Cazz Grant are also a force to be reckoned with, a sound so diabolical that would make the Devil himself proud. Also featured is an absolutely ripping cover of the Carnivore classic ‘Jesus Hitler’ that would make the late Peter Steele shiver in his combat boots.

Despite multiple line-up changes and hiatuses throughout the years, Crucifier have proved once again that they are a true mainstay in the metal underground with ‘Say Your Prayers’, which is available now in all formats via Iron Bonehead.  Give this one a listen or forever be a wimpy poser!