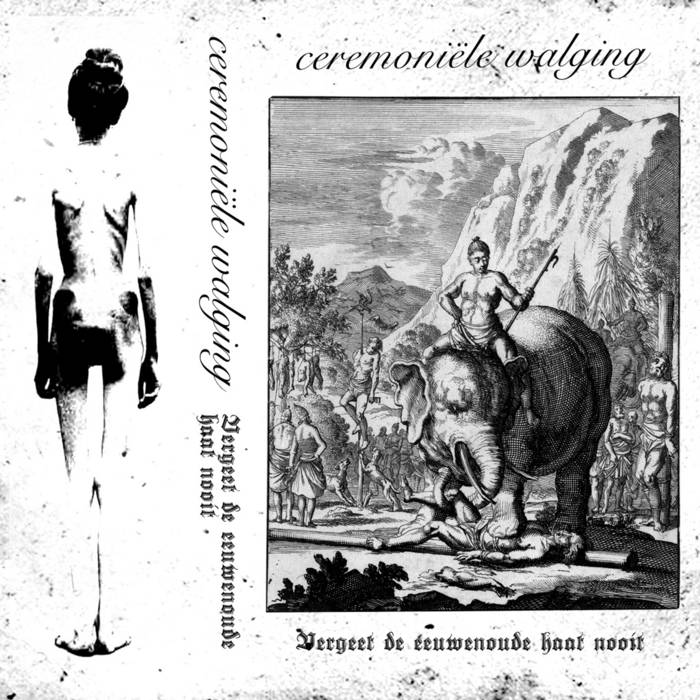 Although this first demo from the Dutch band Ceremoniële Walging was self-released in digital form in 2021, these four first tracks did not see a physical release until early 2022 via the Belgian Babylon Doom Cult Records label. The cassette tape, released in an edition of 100 copies, offers a first introduction to this band from the north of the Netherlands.

The hateful and dreary Raw Black Metal is delivered with impressive dedication, with the title of this demo ‘Vergeet De Eeuwenoude Haat Nooit’ (which translates to ‘Never Forget The Age-Old Hatred’) coming to fruition. The four songs are delivered at a fairly monotonous pace with the sharp riffs and screams coming together to create an all-consuming dissonance. The rather dim production does offer some counterpoint to the violence of the guitar and vocals, so it still feels fairly organic. Combined with the repetitive nature of the riffs, the whole thing produces a hypnotic effect, treating the listener to a host of subtle variations and making the demo feel like one coherent 17-minutes lasting session. In this light, it does fit into the tradition of a number of other Dutch bands, who have taken a similar approach to the Black Metal genre; think of a band like Turia or Lubbert Das. ‘Vergeet De Eeuwenoude Haat Nooit’ is an impressive first work from this new band, which will definitely go into the books as one of the best Dutch Black Metal demos of recent times.