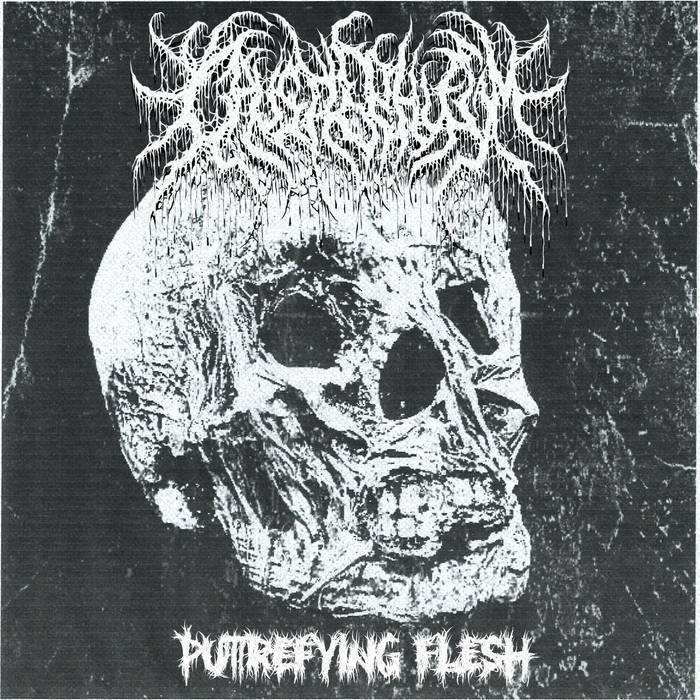 These days gnarly and cavernous Death Metal seems to be incredibly popular. Labels like Me Saco Un Ojo and Dark Descent Records seem to be caught up in a kind of race in which they do their best to find the filthiest Death Metal. With Undergang the Danes seem to have provided the generally accepted starting point in this and still seem to be a leading nation, but by now they have found many international supporters. The downside of this is that the music is becoming more and more alike and the spontaneity is disappearing.

Fortunately, there are still bands that manage to escape from this. Like this one-man band from the United Kingdom. The man behind Caustic Phlegm, Even, now digitally releases his first three-track demo.

Where many bands in the Old School Death Metal genre tend to be too much alike, Caustic Phlegm has quite a face of its own. Even though that own face is made up of all sorts of familiar elements. The buzzing chainsaw guitar sound of the Swedes, the doom and gloom of the Finns and the chopping riffs of the Americans make this sound like an international death-o-rama. It’s a true relief to hear a Death Metal demo that doesn’t aim to sound extremely cavernous, but just strings together nice, clunky riffs. A bit like the Horrendous-demo, although that one sounded even more fresh and made a remarkably larger impact on me than this ‘Putrefying Flesh’. The analogue-like production, including tape hiss, and the spacey keyboard intros make the whole thing extra tasty. Add to that the low gurgling vocals and you have an extremely successful first demo from a promising band.