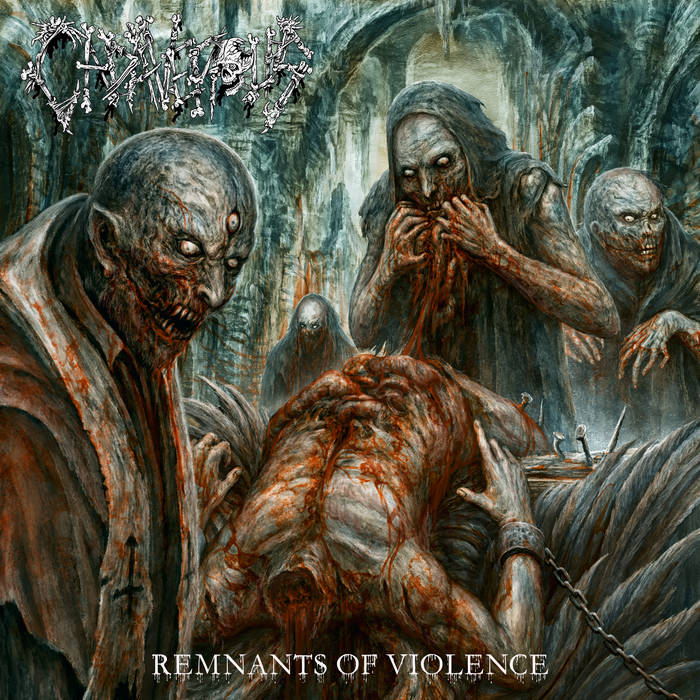 Not long after their quite unimpressive EP (demo), Cadaverous is already releasing their first full-length album. In any case, the trio from Indianapolis, Indiana doesn’t like wasting any time. This time, the band is self-releasing it on CD and Frozen Screams Imprint signed for the cassette tape version again.

My biggest complaint on the previous EP was the wretched sound, flat and without texture. That has improved a bit on this first long player, it sounds a lot less flat and digital, but it still lacks the production it really needs. It still lacks the depth it needs and all the individual instruments remain pretty much separated from each other and do not become a homogeneous whole. As a result, once again the lead guitar falls through, but the vocals are also underwhelming. When you choose Death Metal with a technical slant, with Cannibal Corpse being the biggest source of inspiration, as a band you do rely on a good guitarist who can keep up with the high tempo and also perform wild solos at the same pace. Unfortunately, that is not the case here. Having heard the EP and this album, I can say with certainty that drummer Dre Duarte brings the best playing in the band, his drums sound by far the best on this album and were also recorded in another session by Carl Byers (Kvlthammer).

The advantage of these days with all the technological conveniences is that it is much easier to record music and release it yourself (digitally). Read our pages to reap the tastiest benefits of this on a daily basis. However, this also has a downside, if you want to call it that, that sometimes you come across musical products that are actually not yet mature enough to come out of the practice room. I am afraid this is one of those.