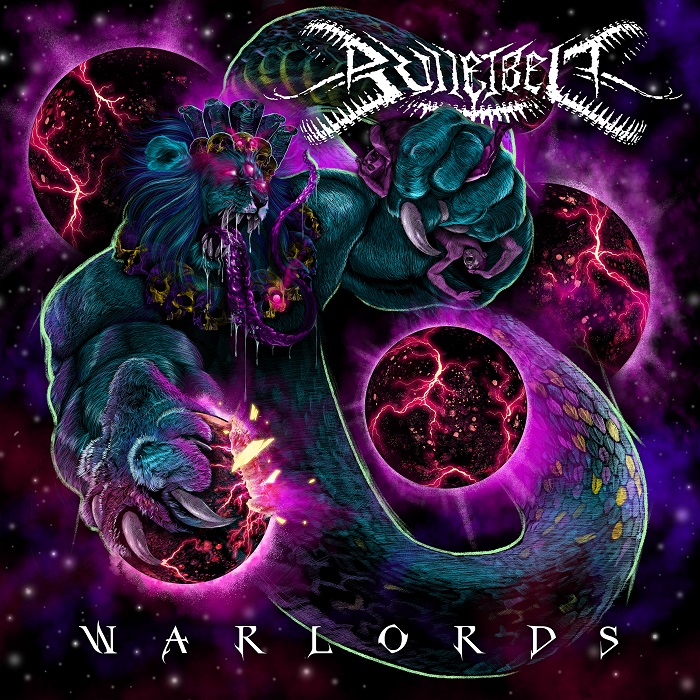 Three reasons why I’m excited by this album. (Albeit two years after the fact) Firstly, the band are called Bulletbelt and that just sounds fucking cool! Secondly, that artwork! I mean come on!! Thirdly, they play Blackened Thrash Metal and anyone who follows my review knows I’m all over that this year! ‘Warlords’ is this New Zealand hordes fourth studio album and has been put out on both CD and LP by the supremely named Impaler Records.

It doesn’t take Bulletbelt long to live up to the hype I’ve just imposed on them, as following a short intro they kick straight into ‘Impaler’ with menace and intention to destroy. This fast paced slick moving slab of feral Black/Thrash is a savage way to open things up and the guitar leads especially excite me, raw, abrasive and stiffening spines with a bout of ice cold steel!

Words cannot describe how much fun this album is, but then its my job to find the words so I guess I’d better knuckle down. ‘Warlords’ is a romping, stomping bludgeoning album, so much fun to listen to and I imagine they slay live too. It isn’t all just break neck speed riffs and drum tones you could use as a battering ram though. There are intensive melodies interwoven into the bands work and they mesh sublimely with Bulletbelt’s core sound of hellraising Black/thrash ferocity. ‘Herodian Kingdom’ is living proof of that the band have a softer side and lead into the track with a peaceful piano based intro. This in turn morphs into a slower track, beautifully crafted and performed and still as relentlessly heavy as previous tracks but with an even grimmer determination and a wonderfully atmospheric touch to the guitar leads.

An unbelievably sublime album, one that thrashes with the best of them, up-roots trees with its crippling heaviness and still has room for some truly epic and expansive melodic wanderings in places too. (Marksson)