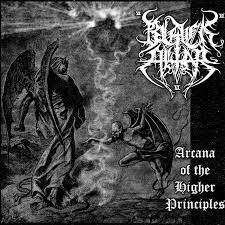 As with almost all bands that have a lot of (split) EP’s in their discography, these separate tracks are compiled once in a while on one stand-alone release, so that anyone who missed the EP’s can still buy them. That is also the case with this compilation by the Polish Black Metallers of Black Altar.

There are definitely some pluses to such a compilation, the convenience is definitely one of them, it saves you from grabbing and flipping a lot of records. But a big disadvantage, of course, is that it doesn’t listen very coherently. You have to deal with several recording sessions, line-up changes and, in this case, several intros and outros being placed after each other. Such things do tend to break the flow and atmosphere quite a bit. But let’s not complain and walk through it quickly anyway, without discussing all the songs and sessions too thoroughly.

‘Arcana Of The Higher Principles’ includes all the tracks from the split releases with Kirkebrann (2020), Beastcraft (2017) and with Varathran and Thornspawn (2012), in this particular order. It is also not unusual for such a compilation to be graced with one or more new songs, so that fans who already have all the older/other material also have reason to purchase it. And that too is the case with this particular release, the title track of this compilation is a new and exclusively recorded song.

Where most of their earlier material was rather standard Second Wave Nordic Black Metal, without meaning to disqualify that, this new track is slightly different. It still sounds very Nordic, but not so much like Tsjuder, Gorgoroth or Urgehal, but it has more in common with the current Trondheim scene, which for Black Altar is quite refreshing, really. It has some nice dissonant riffs and quite technical riffs and twists as well as those wild dynamics in drums.

The songs from the split with Kirkebrann sound very bombastic and symphonic. A style quite in contrast to a lot of Black Altar’s other/older material, in the pasages with a lot of choirs and orchestration it doesn’t even sound that far removed from later Dimmu Borgir. In contrast to the symphonic approach of those Kirkebrann songs, the songs with Beastcraft are again much more basic, with a slightly dissonant slant and being quite gritty in sound. Also notable are the somewhat strange ‘clean’ vocal outbursts. On the last tracks, those from the split LP with Varathron and Thornspawn, the band has a completely different face again and shrouds itself in a decent Death Metal sound. While doing so, Black Altar doesn’t even sound that far removed from compatriots Behemoth of some 20 years ago.

This way, you do get a decent look at the band’s varied discography and various guises. Of course, I knew the band had changed a lot over their 25-plus years of existence, but now that these songs are brought together like this, I really realise it all the more. I think that this is exactly the added value of such a compilation. Yet, it is also a good start for those who are not (that well) acquainted with Black Altar, as it gives you a nice overview of what the band has to offer.