Poroniec – “Poroniec in Slavic Demonology is a mighty Demon raised from the soul of a child who died before birth by intentional procedures performed by women to miscarry.” 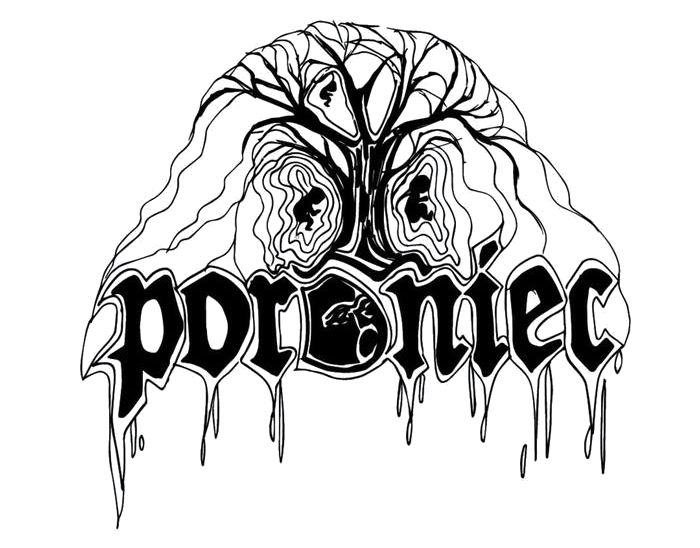 Polish Black Metal duo Poroniec have one of the more unique sounding styles I have heard in many a year. I spoke with Ferment and Wrzaskun about Slavic Demonology, the lamentation of children, and much more. (Marksson)

Greetings Ferment and thank you for taking the time to speak with me. We are entering the winter months. Is this a time of year you enjoy? What does a Polish winter feel like?

WRZASKUN : In big cities like Cracow, winter time brings with it dirt, mess and polluted air. Streets are filled with people running in the Christmas rush. For me most of all  it’s the best time to write new lyrics and read some literature. Day is short and night is long, so it’s the best time to calm down and recall the memories of  the passing year. Also it is an opportunity for mountain trips, where the charms of winter and communing with wild nature during hiking are incomparable to anything else.

FERMENT : Personally I love winter. Everything outside looks contrasted – black and white colours. I really enjoy skitournig and walking in the mountains with no headphones. When I get tired and I am surrounded by a beautiful environment, sometimes I hear music in my head. Often I write down some keywords, which guide me later when I sit with an instrument.

To start with, can you please tell me about the origins of the word Poroniec and how you came to choose this as your band name?

PORONIEC: Poroniec in Slavic Demonology is a mighty Demon raised from the soul of a child who died before birth by intentional procedures performed by women to miscarry. It was believed that an unborn child is motivated by envy because it did not have time to enjoy life. This envy was compared to the one that was observed during casting bad spells. We have chosen this name because it’s a fascinating part of our pagan history which fits well to our lyrics and times in which we have to live.

Your band logo fits your band name superbly well; a tree which has unborn foetuses curled up within it. Who designed the logo and what instructions were they given?

PORONIEC: Logo was completely designed and made by ourselves. While getting familiar with Slavic demonology we found that people used to hang dead foetuses on trees as a warning for  people approaching their land.

Your debut demo feels held together by the lamentations of children. Each song has a similar intro and outro segment. Do you consider the demo to be a concept demo with one central theme? Can you elaborate on that theme?

FERMENT: Totally, you are right. While I was recording instruments on both demos I wanted to combine tracks with some theme to make it feel like one story, not separated tracks. First thing that came to our minds was the lamentations of little Poroniec Demons.

I said in my reviews that you have a signature sound that is very personal and uniquely yours. How would you personally describe your sound?
FERMENT: It’s hard for us to describe our sound. The only thing that I wanted to achieve was not raw sound, but a combination of clear, spatial and fuzzy tone.

Between your two demo releases, do you feel that you have progressed in terms of song-writing and musicianship? I felt your second demo was more expansive, would you agree with this summation?
FERMENT: To be honest, music for both releases was written at the same time. Vocals, recordings and production were made later so maybe the time that has passed helped us to get more familiar with material and to develop my production and mixing skills.

You have also released an EP under the name of Ferment. What made you start a new project away from Poroniec?
FERMENT: I have decided to make “Nie było mnie nigdy” because I wanted to share different emotions which were in me at that time. On this EP there is one track called “Uschnięci kochankowie” on which lyrics and main vocals were recorded by Wrzaskun, so I do not cut off myself from Poroniec.

What would you say are the key differences between Ferment and Poroniec? Are there any differences in the creative processes between the two projects?
FERMENT: The key difference is that in 3 first tracks of Ferment there are my lyrics and vocals. Lyrics were written in a specific way. I have decided to write them down when I felt the moment and not to correct them at all. I wanted to catch a specific emotion and close it inside the EP. While making Poroniec, I am composing all instruments in my home studio and Wrzaskun writes lyrics. Then we meet and start recording demo versions of tracks, later on we listen to them and decide what we like and then we develop the best ideas.

Are there any new releases in the pipeline for either band that you can share details of?
FERMENT: We are finishing recordings for our debut full-length album and hope to have it released next year. I am also preparing a new EP with a vocalist from another Cracow black metal band, be prepared for it in the following year!

That is all I have for you. Thanks again for taking the time to answer my questions. The final words are yours.
Thank you for the interview.