Bones [BEL] – “Of course it wouldn’t be Death Metal without some moldering corpse, so I took care of that.”

If you are a narrow-minded old fart (or just young piece of shit with the same attitude) who thinks Old School Death Metal can only be played by the well-known veterans, I dare you to take a listen to Bones; a fine youthful combo with the right musical spirit as old Death and Autopsy is their main inspiration. And equally important, they are passionate. I present thee…Bones! (Ricardo)

It is always a boring question, but how did you guys started? Like most bands, just having a good beer or 12, listening to the old gods of Death Metal (or in your case, the demo of Morbus Chron) and decided to form a band to play the stuff you hear? And not unimportant question…do you still know which brand of beer it was? Don’t give me a “Stella Artois”, I have higher expectations than that of you guys…
Stef: Yes, indeed, that’s basically how it went. I met Jeroen in a bar we both frequently visited, found out about our shared interest in Metal and got talking. He knew Viktor who plays drums and later on Lukas joined on bass to complete the line-up. The beer was probably Jupiler, wich is what most bars serve over here.
Jeroen: Stella is the superior pils beer of the two though.

In 2013 you released a demo on a cassette, simply called “Demo 2013”. After it was sold out, you even did a repress on cassette, so you didn’t decide to distribute it as a free download or CD. Does the format of cassette means that much to Bones? It also has been released on cassette by Morbid Bastard Records and Weed Hunter records, while Byllepest Distro released it on a 10” vinyl. Can you tell us more about those deals and how you got in contact with them. If I’m correct, one of you got in contact with Byllepest Distro just because you were on a hiking-trip through Norway?
Jeroen: Tape isn’t that special to us, it’s just a pretty cool format to use for a demo. We didn’t choose tape to purposely limit access to our music, all our material is available on our bandcamp. Yeah I met the guy from Byllepest while I was hiking in Norway. It was getting dark and we were looking for a place to put up camp, we ran into him and he and his friends offered us a bunk in their hut. We started talking and one thing lead to another, he’s a real nice guy. Check out his band Jenkem Warriors.

At the end of 2014, a co-operation between Pulverised Records and Blood Harvest made a possible to release the new EP on 10” vinyl. Once again, this is an exclusive release, this time on vinyl. Why? Not a big fan of CDs? Or will there be a CD release later on? How did this co-operation happen by the way?
Stef: Blood Harvest had asked us to do a 7″ release for their label after we sent them a promo of our demo, eventually the running time of our EP exceeded that of a 7″ so we decided to do a 10″ rather than cut a song. Either way, demo’s and EP’s don’t belong on a CD I think. They are great for full albums or compilations and the like, but for merely a demo or EP I find it somewhat cheap.

In my review I wrote the following: “They are playing in the vein of old Death, Autopsy and even some short parts of old Immolation (“Failures of Gods”-album, for example during “Adulation of the Spheres”, a certain drum and guitar pattern which starts at 3:30). But to be honest, “Awaiting Rebirth” is more about old Death (riffs) and Autopsy (Death/Doom murkiness) than Immolation. It was just familiar pattern during that song.”. Part of the fact that I mentioned Immolation, I think no one can deny the Death and Autopsy influence. Are there other bands or albums that you consider as main influence for Bones and the putrid music you are playing? Also, funny to read that “Symbolic” is the Death album for Viktor…By the way, that Immolation thing…coincidence?
Stef: Autopsy was indeed my main influence during the writhing of the demo and the EP. Death has never been an influence for me personally, but we have seen the name appear more than once. Immolation, once again, is not an influence for me either. I really enjoy their 1st album, but more for nostalgic reasons than any other I think, not sure… My main influences have changed a lot since the EP, as I myself have grown and changed. Right now I think it is a mix of Morbid Angel, Morbus Chron, Necrovore, Domains, Grave Miasma, ZOM, and a slew of other bands.
Jeroen: My initial influences for Bones focused mostly on stuff like Bolt Thrower, Darkthrone and Death. After the demo that quickly changed however, all of us are much more influenced by Morbid Angel now for instance, like Stef says. Also at the time (early) Immolation didn’t really influence my writing but it certainly does now. That part in Adulation you mention was not influenced at all by them but I can definitely see where you’re coming from! Other current influences include Hellhammer, Goatlord (DT album), Vasaeleth, Doom, Poison (Ger) etc..

In your own words, what is difference between the demo and the new EP? And the lyrics…I understand you guys read a lot, a wide range of subjects…from Babylonia to Sci-Fi and philosphers.
Jeroen: The demo was primitive and to the point, on the EP we went for both more aggression and more atmosphere. I think we feel the material we’re working on right now surpasses both though. When it comes to lyrics, I don’t want them to be an afterthought like so often is the case in this type of music. Mine are focused on ancient religion in all its (grisly) aspects mostly. I read a lot about that, among other things, so it creeps into the lyrics.

The artwork is made by you, Jeroen. It is totally in the vibe of the end 1980s / early 1990s illustrations, I really like it. What are your plans concerning artwork? Willing do to artwork for other releases or planning on selling artwork? What was the inspiration to make this artwork for the EP?
Jeroen: The artwork builds on the ancient near east themes found in the lyrics. Of course it wouldn’t be death metal without some moldering corpse, so I took care of that. It depicts the remains of an ancient ruler on his throne, in some forgotten temple. It’s kind of a ‘failed’ immortality, an idea that I like. All these ancient cultures are seriously preoccupied with eternal life and the road towards it, very rewarding material to work with both graphically and lyrically obviously.

The sound on the EP is raw and fits like a glove. It seems you have recorded the songs in one take. I can guess what the motives are, creating that authentic live vibe, but could you tell me why you have chosen this way of recording? Whose idea was it and would you do it again?
Jeroen: Pretty much all of it is recorded in a single take yes. We wanted an authentic or ‘honest’ sound if you will. It seemed like the thing to do at the time, not sure we would do it again but for all of its faults and mistakes, it does capture the energy and rawness, so that’s the most important thing. 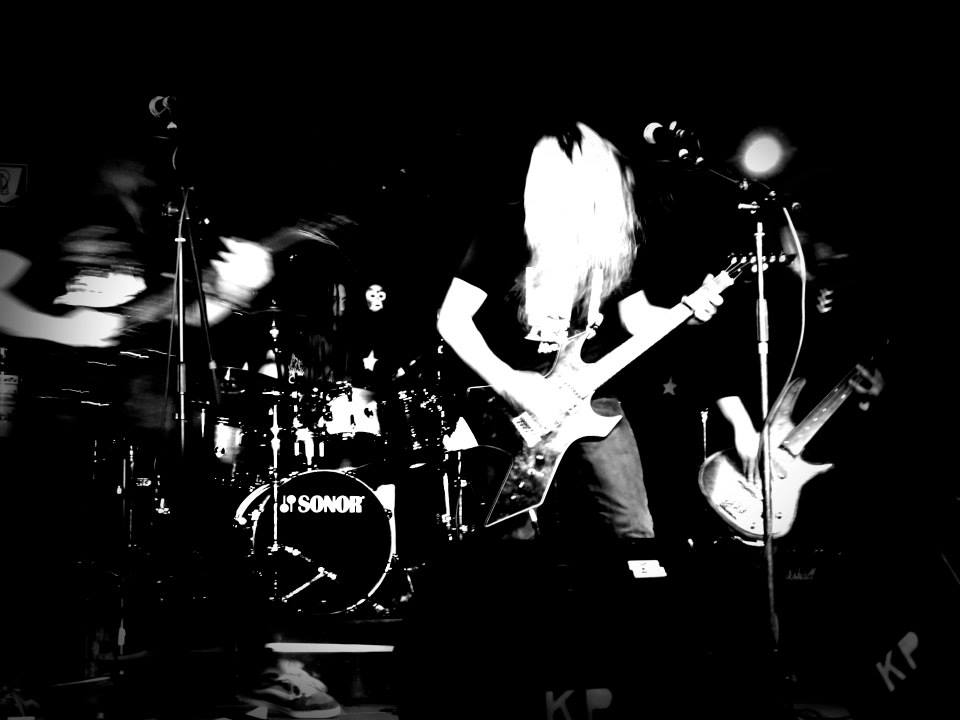 As mentioned in the intro and in my review, you guys are quite young. Do you receive blunt remarks and judgements about your age in combination with the Old School Death Metal you are playing? Something like “What do you know about Old School Death Metal, you weren’t even born back in the day. I was there!”. Or is it just like “when you’re good enough, you’re old enough”.
Stef: I don’t think any of us have ever heard comments regarding our age. If anything most people of the older generation are excited to see new blood. And we are old, not young, if compared to the age of bands like Nihilist when they released their first demo’s on the world.
Jeroen: Exactly.

What about the near future…?
Stef: Musically, we have already taken on an entire new form compared to our previous releases, I will let the music speak for itself. We now have 3 new songs that we are taking to the stage as we speak, plus an older one we have been playing for a while. Our next goal is writing a full length album.

Well, let’s put the music aside..and talk about Beer! Yes, I think it deserves a capital B…What are your favorites? Besides Belgium, are there other countries you would like to mention as a fine Beer-country? I myself am proud of some Dutch products (La Trappe Quadrupel, Hertog Jan Weizener, Molen Rasputin to name a few). Also I’m always interested in (Imperial) Stout, Porter and Barley Wine categories which are aged on Whiskey barrels. I also think the UK and USA beers are getting better and better, yet the USA ones are a bit too much experimenting sometimes. Oh, I like the Mikkeler Brewery from Denmark very much. Do you think the Westvleteren 12 is the best Beer of the world? Well, I can talk hours about Beer..you…go!
Jeroen: Oh yeah La Trappe Quadrupel is definitely one of my favorite dark beers. I also love Westmalle Tripel, Troubadour, Maredsous and various Geuze-beers, among others. Generally I’m not a huge beer-connoisseur though, I think you know more about it even though I live in the beer country, sorry to disappoint you!

Thank you, for finding some free time to answer these questions!
Stef: Thanks a lot for the interview, come see us live if you have the chance and check out the new stuff. WORSHIP DEATH!
Jeroen: Thanks for the questions, and if I can give you and your readers a recommendation, check out our buddies Cadaveric Fumes from France, disgusting death metal.