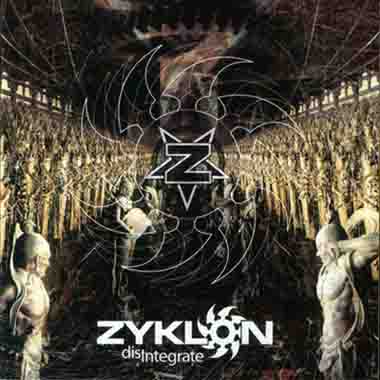 Immediately after the release of the “Storm Detonation Live” DVD Zyklon comes up with their third full-length album “Disintegrate”. Generally in metal music it is said the third album will make a band or break a band. In Zyklon’s case I can say with full confidence that Zyklon is here to stay.

“Disintegrate” can be seen as a good blend of both “World ov worms” and “Aeon”. Both the darker, blackened side from the debut album as well as the more brutal in-your-face death-oriented side from the second album are present on “Disintegrate” resulting in an all destroying whirlwind of extreme metal. With an excellent production, taken care of by Fredrik Nordström (Fredman Sudios), the songs have gained even more power. With a wide diversity of great powerful riffs, excellent growls and extremely tight drumming Zyklon have put the bar up higher again and I am curious in which ways these veterans will go in the future. But untill then “Disintegrate” will stay in my CD-player for a while because this album stays damn good without losing any power.

As said in the first few lines it is a third full-length which will make a band or break a band. With “Disintegrate” the band made it for sure. No doubts about that!!! (MarcelB)