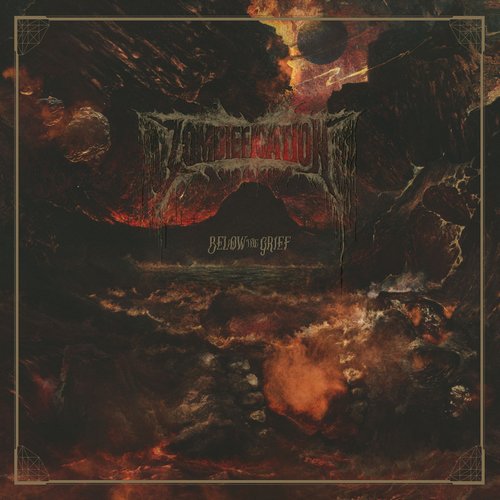 This one took me by surprise. This is my first introduction to Zombiefication and to be honest I was expecting some straightforward Death Metal. This is honestly the farthest thing from typical and showcases a band that has written an undeniable masterpiece of odd and interesting metal.

The best description I can think of is later Entombed mixed with droning melodic black metal and some 70’s hard rock. Tempo wise it’s fairly straight forward but riff wise the band throws everything but the kitchen sink at you. Mid-tempo stomp riffs,thrash riffs, slightly off kilter melodic riffs and black metal riffs are all splattered throughout. What I really like is that some of the riffs are riffs that you have heard before BUT the band will keep adding layers until it sounds like something completely unique. You almost start to think that the lo-fi production won’t be able to hold all of the pieces in place but it most certainly does. It also gives the album a boost in rawness that helps everything hit home with more power.

For sure the songwriting is unique, but it is the vocals that really make this stand out. The band could have easily used a growling vocal approach but instead opted for really pained despair filled shout. It brings to mind vintage black metal but also brings to mind Entombed as well. It’s a super interesting vocal approach and it takes the album in a very cool direction that I certainly wasn’t expecting. I remember my first listen to the album, I actually was kind of stopped in my tracks when the vocals started. It was so different than what I was expecting and it works.

I went back and listened to a few early albums from these guys after spinning this latest one a bunch of times and the progression is undeniable. The band has grown from a fairly by the numbers Swedish death metal styled band to a very unique band that takes from many different subgenres of metal. The Swedish style is still there slightly but this album is an interesting excursion of heavy riffs, awesome melodies and pained vocals that is not to be missed! (MikeH)