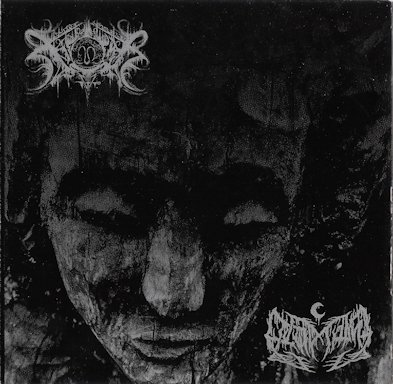 Though always wondrous curiosities, split releases tend to be frustratingly sketchy affairs. Almost invariably, at least one of the artists involved isn?t quite up to scratch. Of course, with the unholy union of these two leading lights from the NWOABM, there is no such disparity. Both bands are veterans of the split release circuit, with a slew of such emissions to their credit as well as their own burgeoning back catalogues of staggering one-man art. Despite their prolific nature, Malefic and Wrest exercise very stringent quality control and, on this amalgam, both maniacs bring something exceptional to the altar.

This release originally saw the light of day in painfully limited vinyl format and those were quickly gobbled up. I never managed to acquire said gem, but listening to the tracks now it is clear that my loss was profound. Leviathan and Xasthur is a marriage made in Hell, just as we like it. The CD re-release should not be interpreted in any way as an attempt to cash in on the rising popularity of the two projects. Indeed, as if second-guessing such a reaction, four bonus tracks have been added (three from Xasthur) to the six contained on the original, effectively bumping it up from EP to LP status.

These bonuses are not mere token gestures, either. From Malefic, we get the sprawling, creepy ?Achieve Emptiness? as well as a valid rehearsal version of ?Telepathic With the Deceased? from November 2004 and a stupendous cover of Katatonia?s ?Palace of Frost?. Wrest joins in the spirit of worship with a magical reworking of Judas Iscariot?s ?Where the Winter Beals Incessant?.

What we have on our hands is trademark Xasthur/Leviathan fare. It?s harsh, grim and ugly chamber BM, yet moody and somehow beautiful in its own special way. You know the way funerals are beautiful? The vibe of both bands is similar as we encounter a Burzumesque melancholy with wrist-slitting razorblade riffs that culminate in a bloody yet glorious end-of-life release. This is suicide music. But, if you do opt to kill yourself, you won?t ever hear it again ? therein lies the rub!

I cannot recommend this album enough. If you are already familiar with the bands concerned, then you know you must buy this. If you still haven?t discovered the American Nightmare, then right here is as good a place to start as any.
Seven of the ten tracks are from Xasthur, but Leviathan?s numerically more modest contributions are lengthier, so we have a good balance. Clocking in at five minutes over the hour, this is an essential release both in terms of quality music and value for money. Personally, I wouldn?t necessarily regard this as the best work that either demon has produced (see ?Nocturnal Poisoning? and ?Verrater?) but that was never the point. As a treat for the fans, it?s still incredibly good and constitutes a thoroughly
relevant slice of prime evil wizardry.

Buy this immediately and all hail the New Wave Of American Black Metal. (GeraldR)