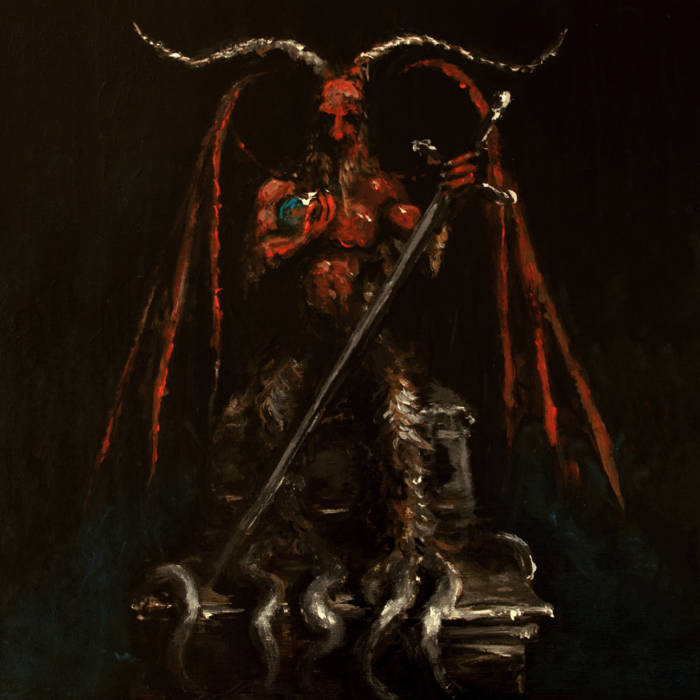 Conjured during one sacrifical night…

Polish Xarzebaal are an entity formed by Warped Blasphemer / Upiór (All instruments, mixing, producing) and Witchslaughter (Vocals, visuals), a bit of research revealed that both musicians are also active in Dagorath. Or as some site describes their music: “A new Polish band with Dagorath members. If you love Mutiilation, Vlad Tepes, Belketre, Torgeist – this record is for you. Rotten Black Metal in the style of the French Black Legions.”

Xarzebaal do create a very raw type of satanic Black Metal. However, the music on their debut album unveils many other things. The debut contains 7 untitled tracks. As could be expected, the opening track is an uppercut of jackhammer drums, heavily rumbling bass and low tuned heavy duty guitars. While you’re seeing stars after the first 5 seconds, Xarzebaal proceed to kick you in the nuts.

These 7 songs are a tsunami of heavy bashing on the drums, multi layered menacing bulldozer bass and a thick curtain of filthy, necrotic guitars. What does evoke the spirit of the LLN, are the maniacal vocals from Witchslaughter, ranging from insane screaming, bestial cries to raw bellowing rage. The music may appear rather simple, but it is far from being simplistic raw Black Metal. Each song is fast paced, without resorting to blast beats, bass and guitars are perfectly fused with the pounding drums and still create a space for the vocals which are very audible.  What makes this album so intriguing are the details: a superb mixing of all the instruments and he addition of subtle details to the sound. You can hear reverb that is buried underneath the sound, or something that might be interpreted as keyboards. It’s all there and it all makes sense.

Musical comparisons? How about the notorious “Black Metal Holocaust” album from Heretic, the music from Wrok, early Barathrum and those sickos from Kwade Droes? These are only distant references, as Xarzebaal have weaved a sound of their own.

“I” is a mindblowing and filthy underground infected monster of an album!! It represents raw, unpolished pure satanic Black Metal in its most vilest form, forming visions of rotten graveyards, candlelit catacombs, moulded bones and unspeakable horrors that weren’t meant to be shown to mankind, and all this with a high class production, as can be expected from Putrid Cult Records.

A mandatory album for fans of the above mentioned bands! You don’t believe it? Check it out on YouTube. (LV)