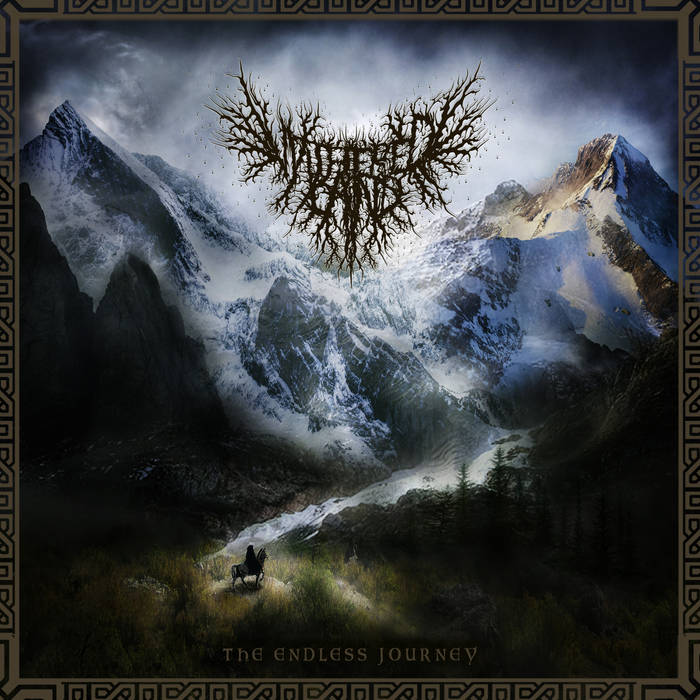 It would be too easy to call Withered Land a side-project of Bleeding Malice, but take notice that this Belarussian act was formed very recently by a member of Bleeding Malice, bassist / keyboardist / lyricist / composer / visual artist Olga Kann (she’s also the woman behind the intriguing Space / Drone / Noise / Ambient project Cryo Depth). For this project, she has been assisted by Bleeding Malice colleague and vocalist Alexander Rabets. Olga started Withered Land in 2020, and she wrote some stuff that differs (a lot) from Bleeding Malice. They did record the material with assistance of Greek engineer Filippos Koliopanos (involved with Ocean Of Grief and recently part as well of the renewed On Thorns I Lay line-up), who also performed the guitar parts on the debut album “The Endless Journey”.

For the physical release of this album, Withered Land did sign to the intriguing Finland-based label Naturmacht Productions. The compact disc edition is a four-panel digipack with glossy varnish, and includes an extended booklet that contains the lyrics (in English), as well as nice artwork, courtesy of Olga (FYI: she works a visual artist, known for artistic assistance for e.g. Monumentum Damnati, Cryo Depth, Ruadh, Engraving Infinity and many more). More limited, there is a digipack edition in A5-format as well, by the way.

“The Endless Journey” is a five-tracker, clocking about thirty-eight minutes. The concept deals with the life and death, and life-after-death (!), of a fearless yet lonely warrior. It is about loss, emptiness, loneliness, death and melancholia, yet also about hope and relief. The whole adventure – and this album is an adventurous narration for sure – is like a sonic projection of vast landscapes, mountains and forests, dark yet starlit skies, with both precious places and evil-eyed creatures lurking in the dark; a magic and mystical atmosphere veils the whole journey of the protagonist.

This sonic journey, unfortunately not an endless one, impresses as from the introduction: bombastic and epic synths painting heroic scenes. Very soon these keyboards get brutally interrupted by a blackened inferno, and somehow I must think about Summoning. Especially the guitar sound reminds me a lot of this (legendary) Austrian duo, and so do the drums actually. Yet then again, Withered Land do not sound like some cheap Summoning clone at all. They bring an own interpretation of blackened symphonies, yet the comparisons are not a stranger either. Anyway, Alexander’s voice is quite a unique one, being ultimately brutal and harsh, breathing sulfur and spitting acid, yet prominently acting in some narrating way too. And that, of course, is part of the warrior’s quest. Besides, he also uses some spoken words, deadly grunts and whispers too.

The compositions, to go deeper into the matter, are unbelievably varying. There are many changes in tempo and structure, and the addition of own-faced fragments is remarkable. The analysis reveals a majestic ability to create this kind of Aural Art. When talking about the first theme, that tempo, well, it changes a lot. “The Endless Journey” is not meant to be a blasting experience, even though the focus lies on moments of darkening and oppressing powers. The better part varies from quite slow over mid-tempo to pretty fast, with everything in between; yet also with everything in exception, being a few doomed fragments at the one hand, and a couple of furious outbursts at the other.

The structure and the addition of self-developed ideas, as mentioned in the former paragraph, is a surplus to be distinctive from many bands and projects within this genre. Orchestral passages get injected by calm atmospheric fragments, fierce parts interact with dreamlike ones, moments of victorious determination go well with pieces of introspection and pudency. Besides, literally there is no performance of Dungeon Synth, Dark Ambient or Folk, yet there is no doubt that genres like these ones simply penetrate the whole story.

The sound quality is a strong one. For sure it is quite clean, yet not over-produced or clinically cleaned-up. No, there is room for that subtle yet necessary rough-edged touch of vice and iniquity. And still, there is a well-balanced mix of all electric and acoustic instruments, voices and samples (like ravens). The guitar solos, for example, take a prominent role when performed, but the rhythm section at those moments (like basses and percussion) do not fade away. Seriously, the equilibrium of all ‘ingredients’ has been completed professionally.

Anyway, if you can appreciate material in the vein of Summoning, Elffor, Falkenbach, Dwarrowdelf or even the likes of Drudkh and (for sure) Raventale, you know what to do… (Ivan “Concreteweb” Tibos)