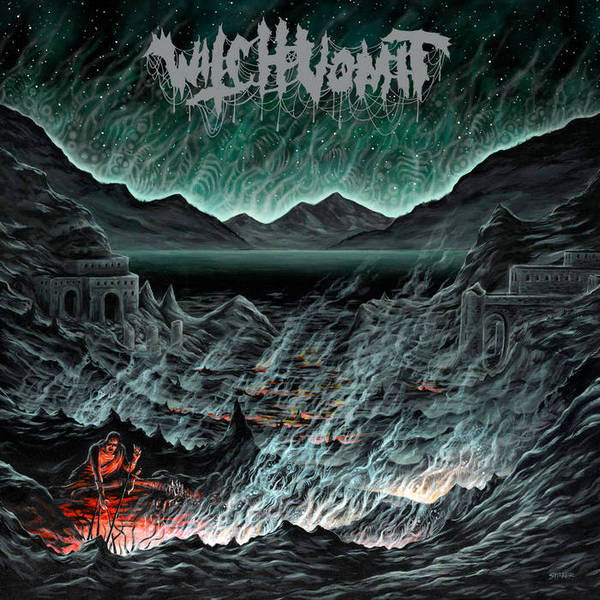 You hear the distant rumble of distorted amps and pounding drums echoing through the looming ominous archways leading into a pitch black cavernous opening which centers on a mound of white ash dirt. Far below the mound in the deep crusted bowels of the sulfur soaked earth you find yourself laying confined in a chamber of dirt within the suffocating stillness of eternity. That distant echo of sweet distorted death reverberating down through the bottomless black earth and piercing the veil of silence is your funeral dirge and it has a message for you… Pray for Death.

Witch Vomit have hit the ground running with their sophomore album “Buried Deep In A Bottomless Grave”, serving up a relentless Death Metal assault at just under 30 minutes, there is no filler here, just riff after riff of putrid oozing Death Metal. There have been several Death Metal gems being released in 2019 so far, a few of them coming from Witch Vomit‘s label 20 Buck Spin and this album is definitely deserving of being added to the list. A balanced attack of Swedish and American Death Metal that falls somewhere between Dismember and Incantation/Autopsy, the seven tracks on the album ebb & flow between blistering fast riffs and dripping mid-tempo bulldozing. The song writing and variety of riffs are what keep the album interesting, a constant change in pace distracts from the “sameness” feeling that often comes with this style of straight forward Death Metal.

There is an 80’s thrash-esque feel to the guitar solos and even some of the faster drumming parts have a thrash vibe in them. I gotta say the drumming on the instrumental track “Squirming In Misery” is fuckin’ excellent, those offset timing cymbal hits are placed perfectly with the guitar riffs. Low guttural death grunts are punctuated with audible screams for a diverse vocal attack throughout the album. The overall production and sound of the album is crisp enough to be elevated above a demo sound but still gritty enough that it’s not polished and is left reeking of despoilment.

The album cover artwork by Matt Stiker is top notch and compliments the feeling of brooding darkness and ominous lurking that one might feel while listening to the album. “Buried Deep In A Bottomless Grave” is an exceptional effort and what I predict to be a well-deserved success for Witch Vomit. (Ted Gloom)