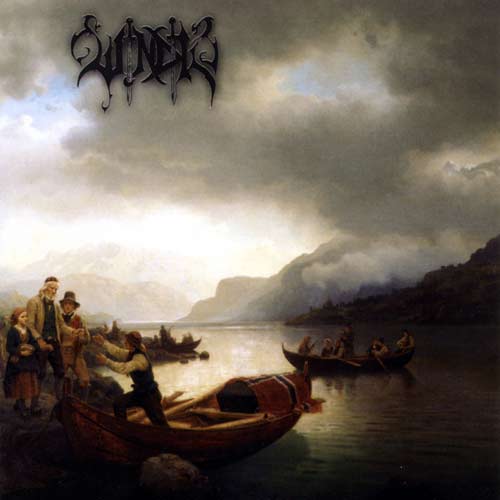 Here it is: ‘Likferd’, the fourth album of Norwegian Windir. This is one of the albums I was looking forward to for a long time. Their second album, ‘Arntor’, is one of my all-time favourites and also the other two albums, ‘Soknardalr’ and ‘1184’ are brilliant albums. It would be a hard job for Valfar, the most important member of Windir, and his band-mates to create a new album that equals the others, but they did it again! ‘Likferd’ contains 8 songs which are all a feast for the ears, from the beginning until the end, you won’t find any boring song or even one boring riff on ‘Likferd’. Yet I have to admit that ‘Likferd’ isn’t the best Windir album according to my opinion, but that is because in my eyes and ears it is almost impossible to make a more intense album than ‘Arntor’. Typically for Windir has always been the use of an accordeon, but on ‘Likferd’ the band sounds more back to basics, without the use of an accordeon; a pity in my opinion. Very positive is that ‘Likferd’ is the heaviest sounding album since the debut ‘Soknardalr’.

For all the people who don’t know this band (blame yourself!) and don’t really know what to expect. Windir plays melodic Black/Viking metal with lots of tempo changes and typically guitar riffs with an own face. Windir uses mostly black screams but at some moments also show up with ‘whining’ clean male community singing parts. On the last album ‘1184’ at one song; Journey through the End’ (the most fantastic song the band ever made), the band did an experiment with using some electronic sounds. On ‘Likferd’ I can hear in a few songs some of those electro tunes on the background for a few seconds.

‘Likferd’ is one of the better albums ever made in de Black/Viking scene and I think the fanbase of Windir will grow fast in the future! Hopefully we can see this band live in the future here in the Netherlands. It was the intention of Windir to go on tour with Aeternus and Bolthorn (great Dutch newcomer) in a few months, but due to the fact they couldn’t find enough clubs to play the tour was cancelled. So check out this band! (GeertVM)