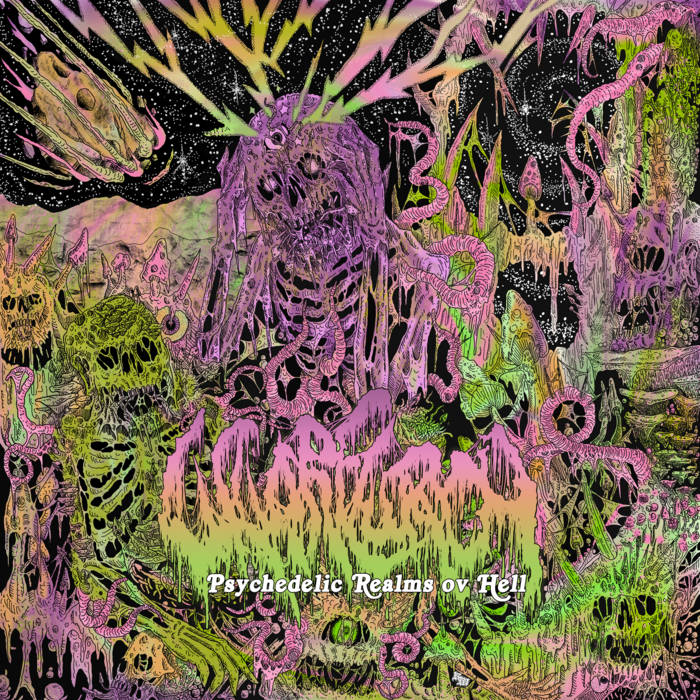 Originally a Floridian duo, now a quartet (since 2020), have a demo & 3 EPs under their belt, progressing with each release. Consistently playup on composition; don’t pigeonhole themselves, but instead offer versatility from Doom, Finnish Death, Black Metal, Thrash, to melodic. Beefy, chunky riffs & heavily fuck with theme of celestial trepidation, they establish an unearthly impression. Different is use of synth during intros/outros, superior production, a myriad of gorgeously written riffs, & elongating all tracks by double! Presenting six songs, roughly 35 minutes.

Artwork by Lucas Valtenbergs, a colorful palette reminiscent of a black light poster, perfect to frame and gaze at while dipping into vices, focusing on all the eyes staring back at you.

“Celestial Mycelium” sets powerful tone of what’s to gorge on; guitar work by Steven Klein is stellar & leaves you with goosebumps toward the outro. “Stoned Ape Apocalypse”, you notice the gruff yet polished vocal cadence by John Mamo, while belaboring the hell out of those drums, with synthy outro by Myk Colby, voice reminds me of intro to Def Leppard’s “Love Bites”. Longest “Abandoning Reality”, simultaneous unsettling start/finish, vocals spewing into higher shrieky pitch mixed with reverberated yelps, has the essence of BM leading melodic midway with flawless solo that feels like you’re ascending into the ceaseless abyss. “Phantasmagorical Fumes”, continually fast compared to other songs feat.