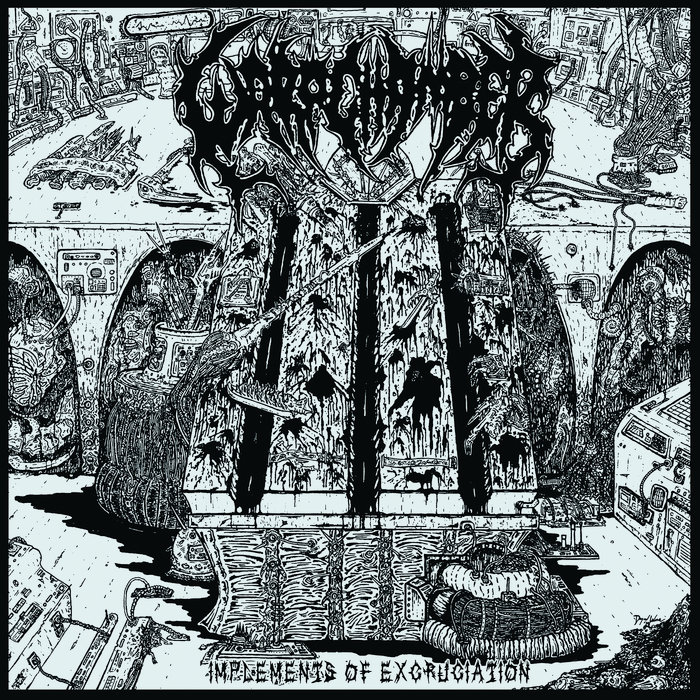 It’s 2020, a year shrouded in mystery with everything collapsing around us in these uncertain times we have one thing to rally us all. DEATH FUCKING METAL. Specifically around the Pacific Northwest of the United States. Cranking out acts such as Coffin Rot, Oxygen Destroyer, Mortiferum, and the  band we’re talking about today Warp Chamber! Coming off an absolute KILLER demo, “Abdication of the Mind” we are given 2 brand new songs from these Death Metal freaks. 4 songs total with 2 songs we’ve heard from the demo are featured on the debut full length titled, “Implements of Excruciation”

As I just mentioned in the opening paragraph, if you’re familiar with this band you’ll like recognize a couple of these songs with the opener, “Abdication of the Mind” a hell bringing flurry of riffs and vocal performance that rivals some of the most evil styles of all time as well as the third track, “Harvesting the Life Force of a Crumbling Orb” a 9 minute descent to the transcendent depths of a warped (PUNS!) mind getting a barrage of drums thrown at you and again the vocals! This may be the best vocal performance of the year. Obviously that’s pending but at this time it’s my personal favorite.

“Shadows of Long Forgotten Terror” and “Exultant in Chthonic Blasphemy” round out the other 2 monstrocities on this album and they absolutely nail the sound that the band is going for. Sonic sounds through pummeling drums and catchy riffs. You go through phases listening to this whole debut hearing all of the bands roots and influences shift from an American death to Finnish sounds with some sprinkle of Killtown in there and you have this sci-fi beast in Warp Chamber. What a great full length even if 2 songs feel familiar it still doesn’t feel aged. What an effort from these deranged manicky mutants. (ThatAustronautGuy)