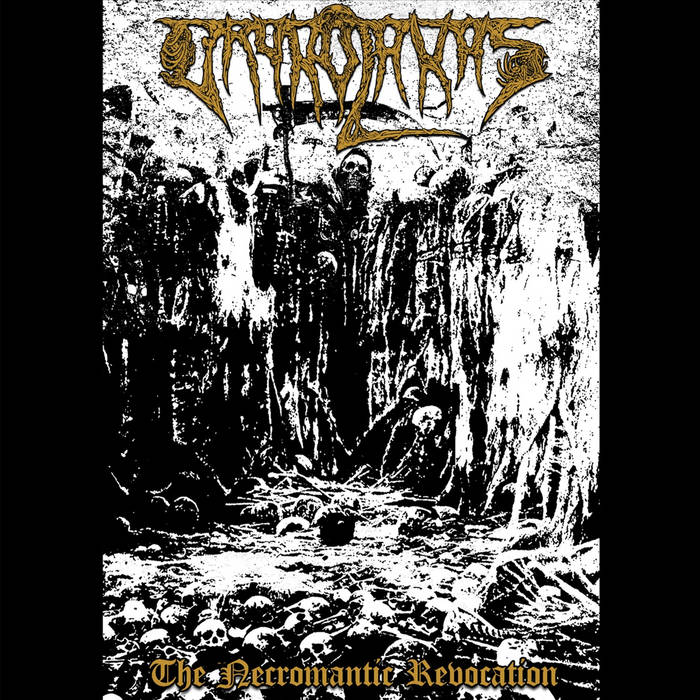 Singaporean Death Metal Band Vrykolakas brandish a punishing Black Death album in “The Necromantic Revocation”. The very soul and nature of “The Necromantic Revocation” is not new as these songs were written between 1993 and 1995. The band decided to re-record 3 songs from their 1992 Demo and 4 other songs that were rehearsed between the period but were never recorded or released until this year June 2022.

The album is as fiery as hell – fast, face breaking straightforward Death Black Metal – bludgeoning from start to finish with little care or compassion or is there any time for melodic interludes. There are Death Doom references in the compositions and the primary influences here are Old School Black Death Metal. The vocals are sick, grisly and grim, and the guitars churn out absolutely brilliant tunes and there are some old Mayhem vibes in here as well (track 6; “Darker Than The Occult). The drums are a merciless barrage of endless beastly diarrhoea blasts beats employed. The riffs are carved right out of ugly, primitive Blackened Death Metal and the whole album makes little effort to convince you of their quality and standing.

That is not to say that Vrykolakas music is devoid of nuance; listen to the textured riffs on the last track, ‘Nocturnal Demons Of Death’ that has a little bit more going on than other songs in this album. Still, most of the album is exactly what it is : raw, old school, and primitive to the end with raw power and energy.

The slightly raw production works very well with the music you find in “The Necromantic Revocation”, providing some of the most apocalyptic blasted, scorched atmosphere in the Band’s music. There is really something here for all the Old School Blackened Death Maniacs. Other bands might be more technically gifted or possibly have better riffs, but not many are going to match the pure spirit of “The Necromantic Revocation”.

Definitely recommend this one to the Old School Black/Death Thrash fiends out there. You will enjoy this album. (Deen “Brother Darkness” Gabriel)