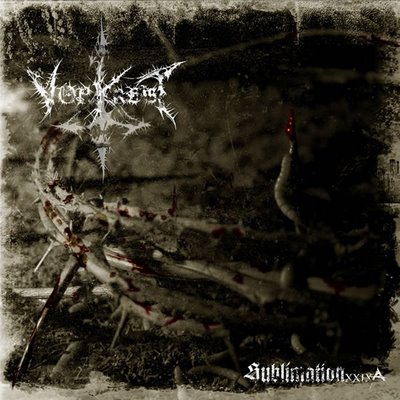 It seems that a while ago, the influences that bands chose were much more logical. Every band took the cue from it’s forefathers, and so forth while that genre naturally evolved. Now, however, influences are taken from handfuls of favorite bands, without any special attention payed to genre (or logic, for that matter). Some bands pull this off well, and use their myriad of progenitors to create uniquely stirring compositions. Others end of creating unfocused exercises in an attempt to be everywhere at once. Fortunately, French black/death project Vorkreist are mostly the former.

‘Sublimation XXIXA’ is a very, very strange album. While the songs themselves don’t really have distinct identities, odd portions stick out like needles in your mind. Vorkreist is not a typical black/death metal band in the vein of Akercocke or Belphegor. No, these guys like to combine blackened vocals with a rigidly defined song structure in old-school DM tradition. On top of that, there are some very distinct portions taking cue from the entire range of each genre, from ripping, raw BM to guttural slam death. Luckily, Vorkreist is able to hold the songs together with logical, professional song structures and melodies that, while not the most innovative ever, function well in their context.

A number of moments stick out on this album. For instance, one might remember the strange bass interlude on opener ‘Great Orders Of Sterile Lunacy’ reminiscent of Carpathian Forest (perhaps the band Vorkreist is most similar to in their style of mid tempo, high note frequency grooves), or the grandiose, psuedo-neoclassical melodies of the title track. ‘Thy Death Divine’, possibly the best track on the album, displays some very interesting yet traditional BM melodies which I thought were all exhausted at this point. Perhaps the strangest track of all, however, is ‘Sodogma’, with it’s strange alternating vocal/drum patterns and truly bizarre slam death breakdown midway through, pinch harmonics, chugging riffs and all.

That being said, the album is not without it’s faults. The second half of ‘Sublimation XXIXA’ doesn’t quite live up to the first half, being much less memorable than the first. It’s not without its merits, however; ‘VKT Konklave’ sports an infectious melodic groove that gets stuck in my head every time I hear it. Generally, however, it doesn’t stick quite as well as the first half. However, Vorkreist has created a very good album in ‘Sublimation XXIXA’. While not something that will convert people to metal, it should very much appeal to black or death metal fans looking for a unique and rewarding take on the fusion of those genres. (Noah)