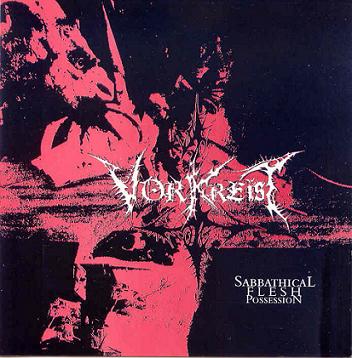 I like it when I find something odd in my mailbox. This time it was Vorkreist from France. The kind of metal they are playing is a blend of Death- and Black Metal. Their first work was released in 2000 under the name of Sermons Of Impurity. Their newest long player is called “Sabbatical Flesh Possession”. It took some time to get familiarize with this kind of style. Listening to music which is comparable with bands such as Cannibal Corpse and Morbid Angel is fine but if the band in question also plays black metal like Immortal and Dimmu Borgir?

My first thoughts about this record were very negative because the sound quality was horrible. Fortunately after a song or two every negative thought was vanished from my mind. What will you think if you are listening to a vocalist who can grunt (S.Tucker) like hell and scream (Abbath) as well. It’s not really a blend but it is more like musical pieces that are arranged together. The guitars are extreme aggressive due to the heavy and low death metal riffs and the speedy black metal guitarlines. Sometimes I heard a few influences from the NWOBHM on (Dawn Of Terror) but ok, that’s inevitable. The drums on Sabbathical Flesh Possession are extremely bad (hollow) recorded so please next time choose the right studio. There is one thing for sure…This is a band with potential. (TobyVB)