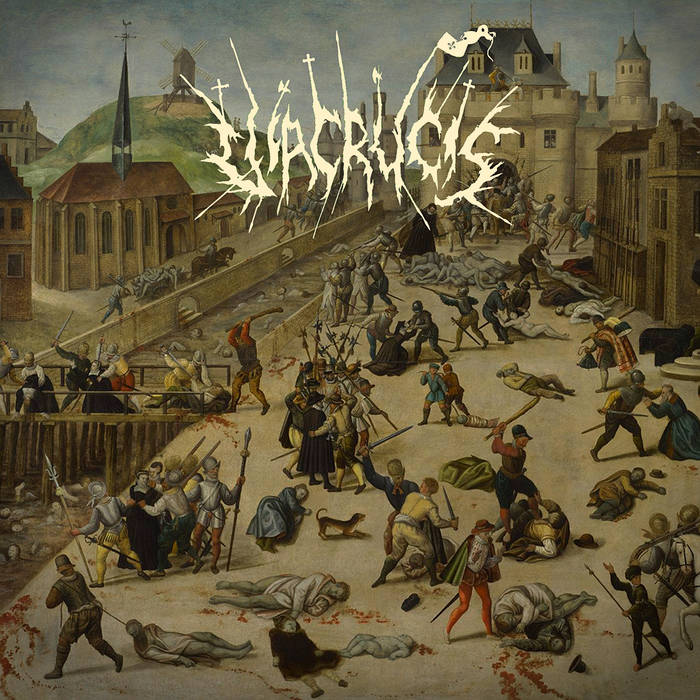 It was the artwork that drew me towards ‘Les Tragiques’ by Quebecois one man Blackened Death Metal project Viacrucis, the brain child of multi-instrumentalist Mathieu Garon. Although completely different in colour, tone and texture, it reminded me in concept of Forteresse’s ‘Themes Pour La Rebellion’ album cover which is a personal favourite of mine. Once I’d delved into ‘Les Tragiques’ I was suitably impressed enough to share this discovery with all you wonderful people.

Most noticeable on first listen is that ‘Les Tragiques’ doesn’t feel like a solo offering and has the sound of a full band in full flowing form. Being a French/Canadian Mathieu has written his lyrics in French, but has kindly added an English translation as to the albums concepts on his Bandcamp page. ‘Les Tragiques’ is inspired by texts and speeches from the mid to late 16th century, from 1562 to 1598 to be specific, when France was torn apart in a succession of civil wars and massacres, which historians call The Wars of Religion. The texts and speeches in question are mainly by Agrippa d’Aubigné, a French protestant writer and poet, describing the tragedies that happened during the Wars of Religions.

Musically Viacrucis offer up a grandiose brand of Death Metal ripe with expansive technical guitar leads and bombastic powerful drumming. Vocally Garon has an engaging, rich sounding growl which compliments the ice cold sheen to the riffs and the bleak, magisterial atmosphere. For the most part the album has a measured and thoughtful approach but breaks down readily into a more pugnacious style and even has a few chugging moments buried within its layers. With its deeply Atmospheric Black Metalesque guitar leads, cavernous sounding drum tones and earthy, bass heavy rumble, ‘Le massacre de Wassy’ is my favourite if the six tracks on offer, but in truth the entire album is of the highest standard! Instrumentally Garon is highly advanced and extremely diverse, and vocally he has a real gallic flair that shines through even during the most aggressive snarling passages. There have been a number of albums this year that focus on a historical aspect as a concept, and this is right up there with the best of them.  (Marksson)