Vaultwraith – Light the Candle in Honour of Devils 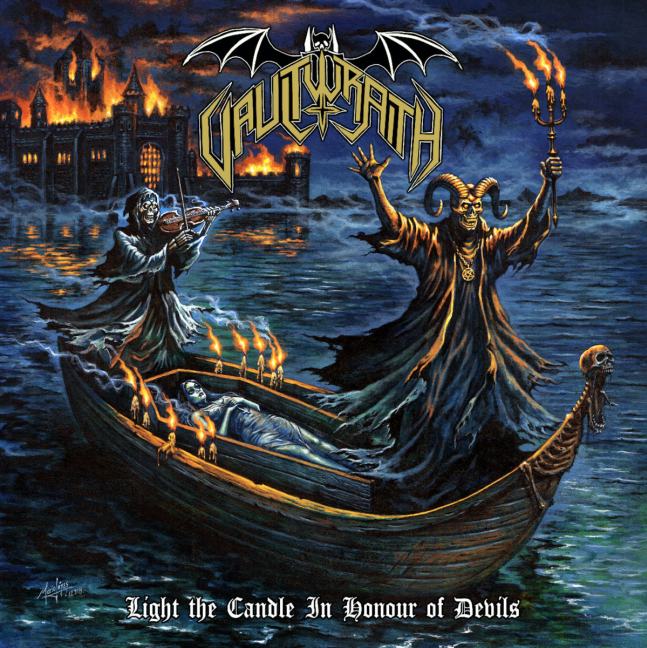 Vaultwraith creep back out of the shadows of their Heavy Metal lair to unleash their second full-length album “Light the Candle in Honour of Devils” via Hells Headbangers this October 31st.

Riding on cryptic evil winds, Vaultwraith pick up right where “Death is Proof of Satan’s Power” left off, packed with even more haunting theatrics and Heavy Metal prowess spread across 12 tracks that clock in at just under 50 minutes. Musically, Vaultwraith have been blending traditional Heavy Metal with flourishes of Death, Black and Doom since releasing their demo back in 2016. A combination of heavy, fast and mid-tempo metal riffs assault the listener at every turn blending traditional fist-pumping Heavy Metal and trem-picked early Black Metal riffs which are accompanied by the dual vocal conjuration of raspy Black Metal vs harsher Death Metal vocals. The writing on display here has taken on another level of craftsmanship and each song envelops the listener into the atmosphere and story through melodic and memorable riffs.

Speaking of stories, the true captivating allure of Vaultwraith lies in their storytelling, although through-out their releases they have always had compelling lyrics, the stories on “Light the Candle in Honour of Devils” are of a higher theatrical level and you will find yourself immersed in every line, picturing horrific scenes that would not at all be out of place in a chilling EC comic tale or B-Movie euro horror classic. I am tempted to dare compare their spinning of tales to that master of horror metal, King Diamond himself.

“Death is Proof of Satan’s Power” was one of my favorite releases of 2017 and I was surprised that it didn’t get more attention from the underground metal fan’s. I hope that “Light the Candle in Honour of Devils” lands in more peoples hands because it is truly a great heavy metal record and Vaultwraith are a hardworking band that deserves success. (Ted Gloom)