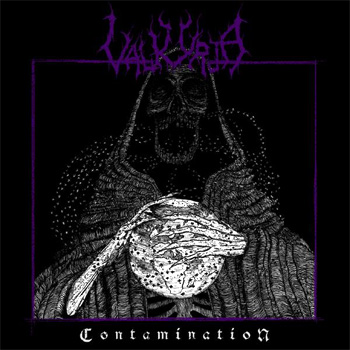 Three years after releasing their debut “The Invocation of Demise” the swedish Valkyrja have unleashed their improved sophomore effort with the help of their new contract with Metal Blade Records. Since their debut Valkyrja has polished their sound and removed the lighter acoustic moments, focusing purely on a relentless black metal attack. Valkyrja’s sound is absolutely massive thanks to towering riffs, A.L’s (this initial thing has really caught on) feral vocals, and of course the production. But it might not be such a surprise when the guitarist and drummer both come from Ondskapt, so even if the band is relatively new they’re more than qualified.

Anyways it’s really quite a feat; I wouldn’t be surprised if it made similarly styled bands such as Watain and Ofermod envious. Also I have to mention that the cover art is brilliant. Unfortunately the inevitable comparison with those bands is partially Valkyrja’s downfall, they’ve definitely nailed their sound but they haven’t quite reached something memorable. The overall experience will almost definitely stay in your mind for quite a while, but it’ll most likely be a blur since you can’t even recall most of the riffs. Listening to the first real song “Oceans to Dust” you’ve basically heard them all, and this album lasts almost an hour. On the bright side that also means there’s consistent quality. Contamination was already an improvement, so I’m sure that the inevitable follow up will be truly special. (JakeMcC)