Vacivus – Temple of the Abyss 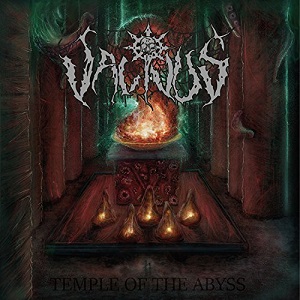 Another strong release from 2017, released by Profound Lore/Goatprayer Records, is the second album from Vacivus. 3 years after their debut “Dawn of Chaos”, the UK death mongers are in great shape, with a muscular death metal sound which is deep and powerful. With a Sadistic Intent and Cruciamentum edge and tons of solos being incorporated to make it this a nice early nineties nostalgia trip without falling much into that Let`s-Do-Old-School-Death-Metal-Like –Tons-Of-Other-Bands trail. The old is here, but some “newer” things in terms of riffing or structures can be found as well. The vocals range from high pitched shrieks (Incursus like maybe) to deep Cruciamentum/Convulse like vocals. Towards the end some ritualistic part with percussion, acoustic guitar and chants start a dark labyrinthine song with shredded chord progression, in change with some tremolo picking and octave chords accompanied with bombsblast. The chants spoken at the beginning will remerge in the middle of the song and makes it an absolute highlight on the record. To me here at this point they found their own sound between Cruciamentum and Grave Miasma as some similarities are present but they do differ. The production is excellent, great atmosphere and overall instrumental tone and mix…nothing is buried, nothing is overproduced and clean either. Great album from the beginning ‘till the end becoming even stronger with the last couple of songs. Drown deep and enter the Temple of the Abyss. (DPF)