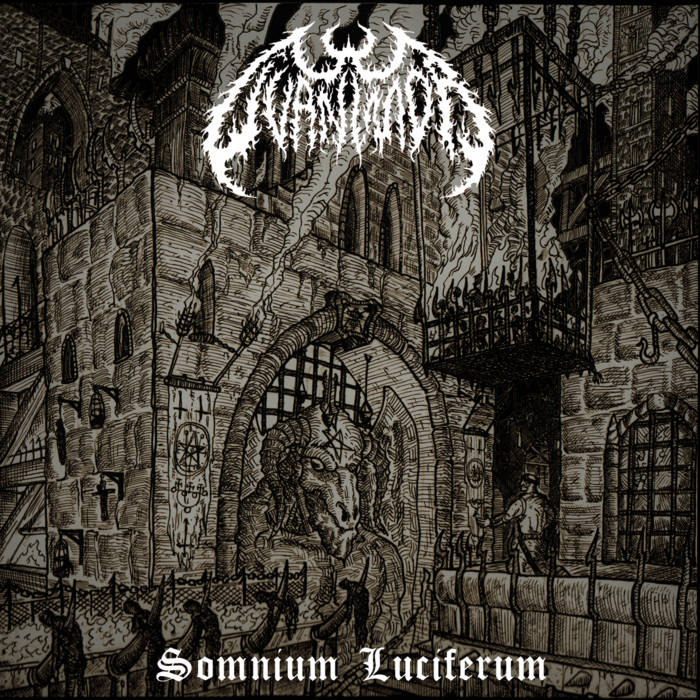 Úvanimor a two-piece raw Black Metal band hailing out of Italy delivers it’s in-house 8 track debut album. Bandcamp teaches me that “Somnium Luciferum” is a concept album, following the journey of a heretic Templar Knight that, after a vision during a forbidden ritual, overturns his beliefs and leads a war against his former order.

The sound on “Somnium Luciferum” is pretty thin, yet after messing with the knobs on my stereo and subwoofer I manage to get a decent sound out of my equipment. Úvanimor take their time to build up the atmosphere through the duration of the album, mostly in a pounding mid-paced tempo with slight variations in speed, never really lashing out with blast beats, accompanied with subtle hints of synths and sound sampling. Keeping all tracks differ from one and other, preventing monotony to set in during the length of the album.

After reading the lyrics, which I rarely make an effort to, it strikes me that Úvanimor succeeds very well in turning the content of their songs into the appropriate musical atmosphere. “Charge on the icy plains” exhibits the hate, the adrenaline, the violence of the frozen battlefield, displayed in a short and furious track. The howling, hypnotic “Moonshine over a Moorland” depicts the passing away of the protagonist during an almost 7-minute epic raw black metal beast.

“Somnium Luciferum” is an album where you can completely immerse yourself into, the perfect soundtrack to a cold winter night, sitting in front of the wood fire, glass of strong all ale in hand, dreaming away of harsh medieval landscapes. (Franki_boj)