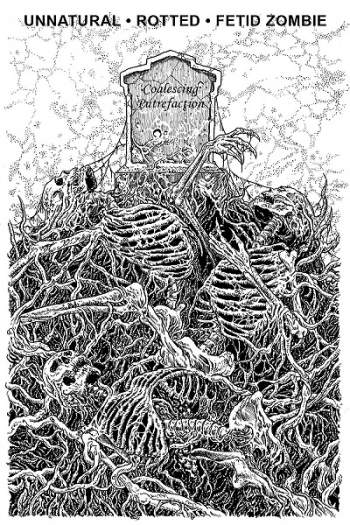 Sometimes things don’t have to be complicated, pick a cassette, 3 bands provide a new song and you have a split. Simple as that!

If you take a peek at this (digital) fanzine once in a while, you may have noticed we already covered 2 of the 3 bands on this split, although I’m pretty sure we’ve covered Fetid Zombie as well. Have to dive into the archives once again. If you aren’t familiar with the acts, you will get some putrid and rotten Death Metal thrown at you, but in a different way.

Unnatural is mostly mid-tempo Death Metal with the sound, attitude and rancid growl  from the Doom/Death scene in the early 90s, you know…acts like Mythic or Cianide. Rotted goes for down-tuned and an ultra-low vocals with slow passages and up-tempo outbursts; The Mortician meets Undergang and Wormridden kind of sewer Death Metal. Fetid Zombie takes a more atmospheric approach, almost synth-laden Pestilence’s “Testimony of the Ancients” atmosphere with a Wannes Gubbels kind of vocals (it reminded me instantly of the vocal lines of the “Waves of Fire” track of Asphyx’s “On The Wings of Inferno”) while the Death Metal itself goes more towards a blend of the aforementioned Pestilence album and 90’s US Death Metal, the Floridian kind concerning melody and leads. If you are familiar with earlier Fetid Zombie’s releases, you will be surprised while hearing the musical evolution with this track.

A very good and varied split by 3 fine underground Death Metal from the US, just keep track on all 3 of them. (Ricardo)