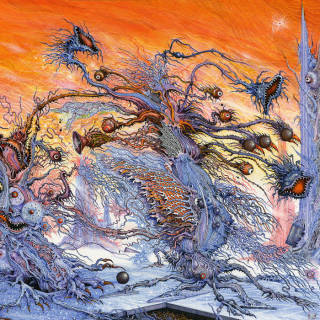 Do you like Blackend/Death/Grind/Doom? 20 Buck Spin? Yeah? Then this is for you. Ulthar’s upcoming release, “Cosmovore” is as deadly as any other release this year and I definitely plan to see it on some AOTY lists. Coming off a very strong demo that was recorded by the almighty Greg Wilkinson these Oakland weirdo’s blend so much together that it comes out this monster that you’d never expect. With unexpected twists and turns it’s an exciting release.

From the start of the album with the title track, “Cosmovore” it throws you into a whirlwind of blast beats and filthy vocals. The album only gets faster and more interesting as the album plays. Tracks like, “Infinite Cold Distance” and “Entropy-Atrophy” bring such a heaviness to the album that drags you through the mud, picks you back up and then slams you back down into the depths. While the epic outro track, “Dunwich Whore” starts you off with slow bleeding riffs that are almost melodic and colorful and then hammers you back into oblivion with beat down riffs and upbeat blasts while closing out like the horror this thing is. Horror in the best sense of the word.

20 Buck Spin continutes to push the envelope with bands they are signing and I’d say that, “Cosmovore” is right up there with their already great releases. Great output from these guys that like I said earlier wouldn’t suprise me to see this making some lists for favorites of the year. (JonG)