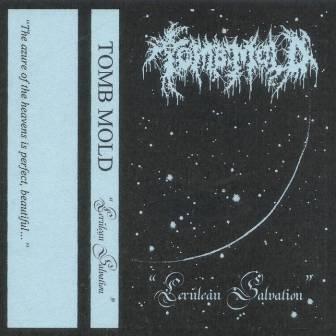 2018 should officially be labeled the year of Tomb Mold. Just a mere 5 months ago they released the exceptional, “Manor of Infinite Forms” and boy did they deliver on that one. As it blasted your face off the whole time it’s by far one of the years best and an absolute classic in the Death Metal genre. And wouldn’t ya know it. These fucking guys dropped, “”Cerulean Salvation” on our ass out of nowhere and left us to die! This EP consists of 2 songs that are absolutely back breaking.

With the first song hits after a very ominous build up, “Planetary Clairvoyance (They Grow Inside II)” Breaks in to classic Tomb Mold sound of murky vocals and in your ass riffs. As it progresses it actually feels like you’re slowly floating towards space and you can feel the end coming and in the end it sounds like and Alien death sentence.

Immediately moving on to the 2nd song and final song on this short banger, “Cerulean Salvation” which is also the name of the beast and it starts out beastly immediately throwing you to the wolves with drums smashing your face and almost a melodic riff escalating to just a crushing brand of death metal that these guys get on another level. They are ahead of the pack when it comes to this and they do it flawlessly. Great EP and a great full length. 2018 is the year of Tomb Mold. (JonG)