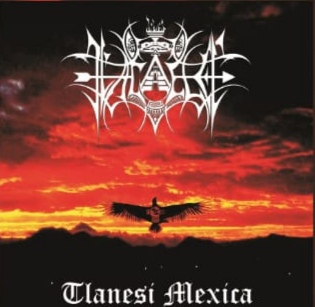 The Mexican black metal band Tlacaelel, named after the principal architect of the Aztec Triple Alliance and hence the Mexica (Aztec) empire, has been active since the beginning of the new century. Founder of this band is the vocalist/bassist/guitarist Rebellion and their debut album, “Armageddon Is Here” was released in 2011 which is a slab of brutal satanic Black Metal, to some extent firmly rooted in the Scandinavian scene, but slightly crippled by a rather muddy production.

And now there is “Tlanesi Mexica”, the new full length album. Inspired by the legendary greatness of pearly white city of Tenochtitlan and the Aztec empire of old. All songtitles are in Nahuatl, by the way…the language of the Aztecs. Opening track “Metztli Pan Tenochtitlan” start with the horrifying sound of an Aztec death whistle, ominous distant wardrums and a horn that seems to call out for battle. And then it detonates in full yield : a massive guitarsound consisting of layers of solid, tremelo picking and hardhitting drums/blastbeats, courtesy of Lord Destruction, that fall perfectly in line with the avalanche of sonic mayhem. Vocals range from sinister Black Metal vocals to bellowing demonic growls and are seamlessly integrated in the music.

It’s a complete landslide, this album. “Tlanesi Mexica”, “Yaoyotl”, “In Notsalo”, they all bear the flexible drumming and the shredding guitars that build up to a climax of epical proportions in each track. “Tika Seanlot An Omitl”, for example boasts a rage that has seldom been heard. All tracks are performed at breakneck speed, leaving no breathing room for the listener.

But the last track, “Ce Acatl Quetzalcoatl” – a gargantuan juggernaut of almost 13 minutes is the most remarkable as it fades out into the sound of waves breaking on the shore line, while an acoustic Spanish guitar falls in, only to be muted by the sound of the menacing battle horn again.

Tlacaelel have outdone themselves this time. The entire album is a whirlwind of speed and aggression even bordering on the brutality of war metal, with an excellent and detailed production. Moreover – their music is quite original to say the least. Discarding their overt satanism for a more profound lyrical aspect about honor, blood oaths, national pride, pre-Hispanic rituals and gods as well as warrior mysticism. Not to mention the remembrance and nostalgia about a highly evolved civilization as well as an unique culture, brutally wiped out by the Spanish conquerors.

“Tlanesi Mexica” clocks out at almost 48 minutes, but it feels much shorter because of the unbridled energy that emerges from the music. Those interested in hearing TRUE Mexican Black Metal and that were ‘aroused’ by the latest Xibalba Itzaes album can grab a copy of this masterpiece without hesitating. They’re in for a serious revelation.

I needed a fresh breath of air and a smoke after listening to “Tlanesi Mexica” VERDADERO BLACK METAL MEXICANO! (LV)