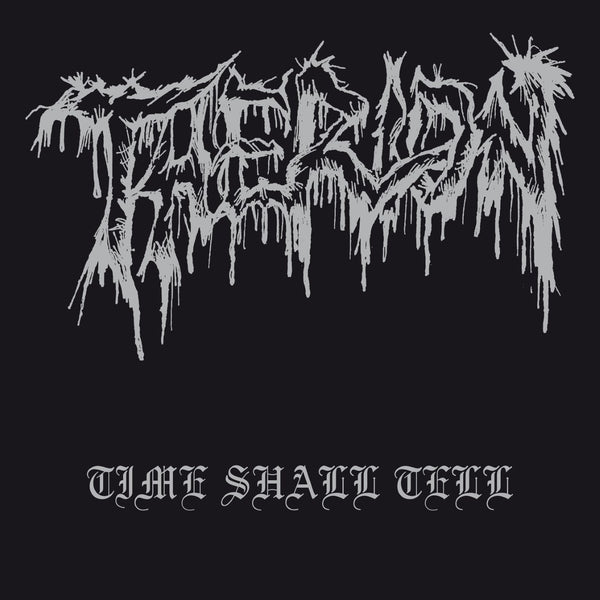 Introducing a band like Therion seems a little pointless as they are among the most successful bands on the Nuclear Blast roster – for a quarter of a century now. Much of their current status is based on immensely successful records like ‘Theli’ from 1996 and 1998’s ‘Vovin’ (selling over 150.000 copies alone) that helped shape the genre of Symphonic/Gothic Metal. A style they still exploit successfully to this day. Yet, that they also played a similar role in shaping the (Swedish) Death Metal scene is hardly a secret. With their debut album ‘Of Darkness…’ (1991) they delivered a true milestone in Swedish Death Metal. Before that, they released the ‘Time Shall Tell’-demo in 1989 and got a re-release as a 12” by House Of Kicks a year after. Now, 32 years later, Hammerheart Records gets it a much deserved reissue.

Much deserved, as this is been hailed as being one of the pinnacles of the (in)famous early Swedish Death Metal scene. And not unjustified at all. These four tracks all have memorable hooks, catchy song structures and unparalleled dynamics. Maybe most ear-catching though are the strong vocals. Rather straightforward yet performed with such a fanatical power that they became half of the trademark of the early Therion-sound. The other half is the sound. Though being one of the earliest recordings by any band in that early Swedish scene and being recorded at the Sunlight Studios by Thomas Skogsberg, it does not have that typical Swedish buzzsaw guitar sound yet. Nor has it that same punk-based Nihilist sound that was basically the blueprint for many other bands that followed, instead Therion had more in common with early American Death Metal bands, which gave them a distinctive identity amongst their peers. Yet, they were still able to blend this all into something that sounds very Swedish nonetheless. All this together, combined with the rather dark production, makes this an EP of iconic stature, not equalled by many.

So, yes, a much deserved reissue. Not only because the original 12” is rather hard to get. But also to help us remind that before Therion grew into the hugely commercial giant they are today, they were a great and promising Death Metal band that helped kickstart a scene that is still so very vital even today. (FelixS)