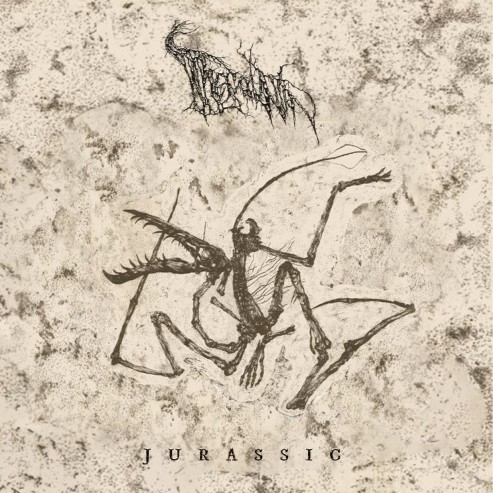 Most children go through the ‘fascinated by dinosaurs’ phase in their lives, but very rare chose it as a career when they grow up. History takes an important part in metal, yet very few artists decide to write about prehistoric times. You can imagine that reading the name of this band immediately caught my attention.

Italian duo Thecodontion (who take their name from the ancestors of dinosaurs, pterosaurs and crocodiles) has been working since 2016 and this is their second release. Probably one of the most interesting and obvious things about their sound is the fact they do not use any guitars to emphasize the chaotic and murky sound which perfectly combines with the whole prehistoric  concept behind it. Instead of using a guitar, there are two distorted basses with the addition of the third one for solos. All of it is spiced up with galloping drumming and barking vocals.

While their demo (the 2017 “Thecodontia”) displayed a Black / Death metal sound on the verge of War Metal (similar to Blasphemy and Conqueror), with “Jurassic” they have started to move more towards cavernous side of the Black / Death spectrum (similar to Portal and Mitochondrion), so it is obvious their sound is taking its shape and it’s doing very quickly. (Black Mary)