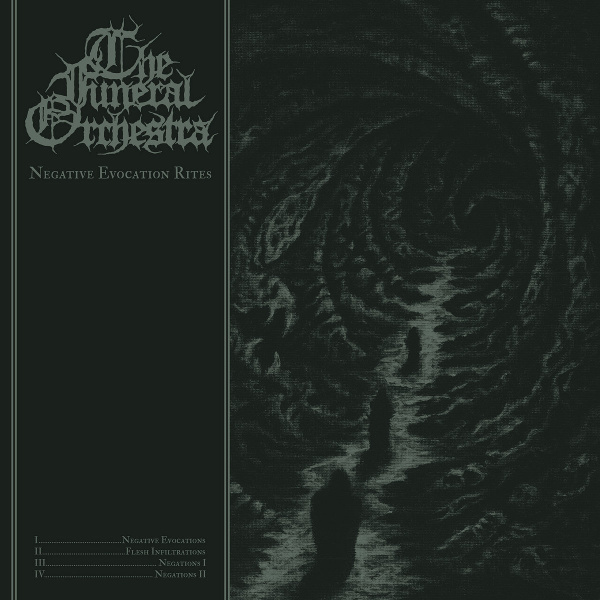 From the very beginning stages of development, every student of Doom is taught to follow one simple rule: “Obey the Riff”. If you “Obey the Riff”, your chances of Doom success, while not guaranteed, are significantly heightened. Or, at the very least, far fewer people will accuse you of being disingenuous. The trouble many Doom artists run into is that obeying the riff is not, as it turns out, a “simple” accomplishment.

Aptly named Swedish Funeral Doom band The Funeral Orchestra have been obeying the riff since 2002. In addition to several demos and EP’s, the trio – known only as Priest I, Priest II, and Priest III — have released three LP’s, all of which prove beyond a shadow of a doubt that these Doom disciples paid attention in class.

The latest gift of slow-burning ruination given to the world by these men is entitled “Negative Evocation Rites”, and I don’t mind telling you that what they’ve managed to summon sounds like it came from deep within the fires of Gehenna.

The atmosphere throughout the album is downright haunting, bringing to mind the darkest vibes of early Sabbath or Cathedral. The later of which may be more accurate in the vocal department. Either way, the ambience created by Priest’s I and II (on guitar and bass, respectively) evokes a torment known to many but understood by few.

There are times it is difficult to tell the two apart (“Negotiations” parts one and two, for example), which provides an astonishing amount of depth. Adding Priest III’s drumming to the mix makes the band sound mountainous (during “Flesh Infiltrations” and “Negotiations II” in particular).

Priest I has a low, snarly approach to his vocals, extremely fitting for the genre which, I might add, do not overstay their welcome. There are times in Doom when a vocalist attempts to compensate for what is lacking in the riff department. That is very much not the case here, as Priest I seems to possess enough riff mastery to eat it for three square meals and have enough left over to feed the homeless of a small city. All of this and I haven’t even mentioned the leads!

Priest I has a way of making his solos sound like flying saucers. No joke! It’s Theremin time! In less capable hands, this might come off cheesy, but we’re not talking about Ed Wood movies here, we’re talking about a modern-day Metropolis.

If you’re a fan of Doom, you will absolutely love The Funeral Orchestra. I recommend it highly for guitarists as well. “Negative Evocation Rites” is, to my ears, their finest work to date. (VUK)