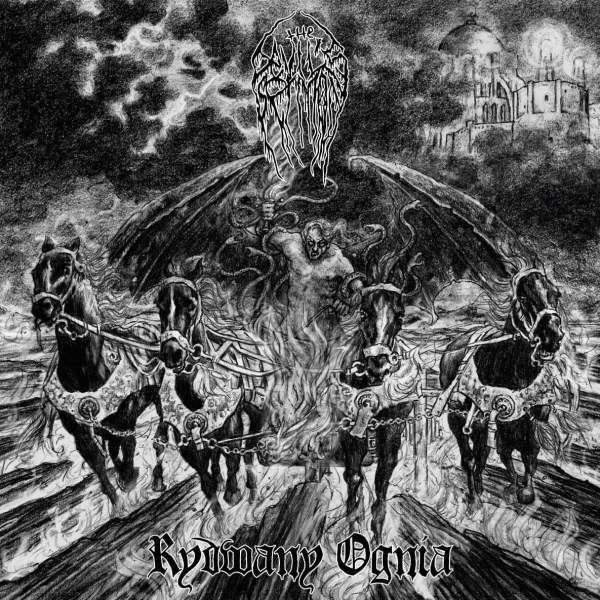 “Rydwany Ognia” (translation: ‘Chariots of Fire’) is the promised & highly anticipated follow up to the “Nie ma boga nad Diabła” full length from The Devil’s Sermon. A band, seemingly formed by Polish musicians living in the U.K.

The new EP opens with “Rydwany Ognia” and I was thinking to myself: ‘this sounds an awful lot like Bathory’. Actually, this a Polish cover version of the “Chariots of Fire” song from the 1987 Bathory album “Under the Sign of the Black Mark”.

That sad little violin intro threw me off guard (you cheeky devils). The Devil’s Sermon even manage to bash up this classic to further heights of musical mayhem with their manic, insane tremolo picking, epic chords and hyper velocity guitar scrubbing. Cool.

Speaking of that violin or string arrangements – they serve as a leitmotiv throughout this entire MCD.

The second track (“Be the Seed of Evil which will poison the World”) kicks off with menacing guitars and a blasphemous demonic voice uttering unspeakable things in Polish.

What has changed since the debut album is the extra room for ethereal guitar solos, a regular shifting in speed and texture and with even more hypnotizing riffs. Drums & bass are perfectly integrated in the mixing. One could say they managed to increase the atmosphere and dark vibrations on this track.

The third track (“In the Abyss – in its place”) is slow to midtempo, even kinda sludgy, fiercely stomping its way through everything. Double/twin vocals are conceived as some kind of demonic incantation or lament. And the guitars provide an uncanny solid wall of sound.

The fourth track (“The One Who doesn’t have a Master”) is again at Mach 3 but with a lot of bridges instead of remaining linear. It contains lots and lots of details, as can be heard at the end of this song. That piercing & emotional string ensemble stabs you right in the heart.

All in all, this MCD is another significant jump forward in their volcanic sound, containing more recognizable melodies, memorable hooks and riffs, a myriad of details – and still remaining faithful to their sulphuric satanic brand of Unholy Black Metal. And in a way it’s conceptional.

With a mere 19 minutes in playing time and such strong songs, it’s a pity there isn’t more.

A maximum score for The Devil’s Sermon. They nailed this one harder than the Nazarene to his cross.

Those who haven’t the debut – get it while you still can, along with this MCD. Those who have attended The Devil’s Sermon before, we’ll see each other at the next black mass … (LCF)