The Crucifier – Voices in My Head 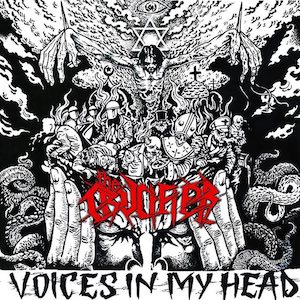 The album titled “Voices in my Head” was already released in 2017, but last summer I had a chat with vocalist Hlias “Thanatoid” Kyriazis, and he forwarded me the entire album digitally for review, so here you are.

They play music in the Thrash style, but then full throttle and with a crossover attitude. Okay, you can’t hide the big influence from Municipal Waste and a bit of the newer Thrash scene played by bands such as Havok, but nevertheless, this party is very enjoyable. The guitar strings are properly abused, the drums give fireworks and the vocals are hyper and aggressive, the way it should be in this style. But especially the intensity is phenomenal, listen to track ‘Forgive and Don’t Forget’ and try to figure out how fast those fingers have to be to create such riff – respect. If you’re not common with this kind of metal, then perhaps you can have difficulties with the lack of variation that could crawl into this sound after listening this one out, but I don’t bother about it on this album, cause for me it’s part of my expectations.

Suggestions from my side: the three tracks in the middle of the list: ‘Forgive Don’t Forget’, followed by ‘Born to be a Slave’ and then ‘Happy Face Man’. Greece can be blessed with this assessment in the metal scene. If you want to feel the rush from these guys, then get aboard of this 36 minutes ride! (Fredde)