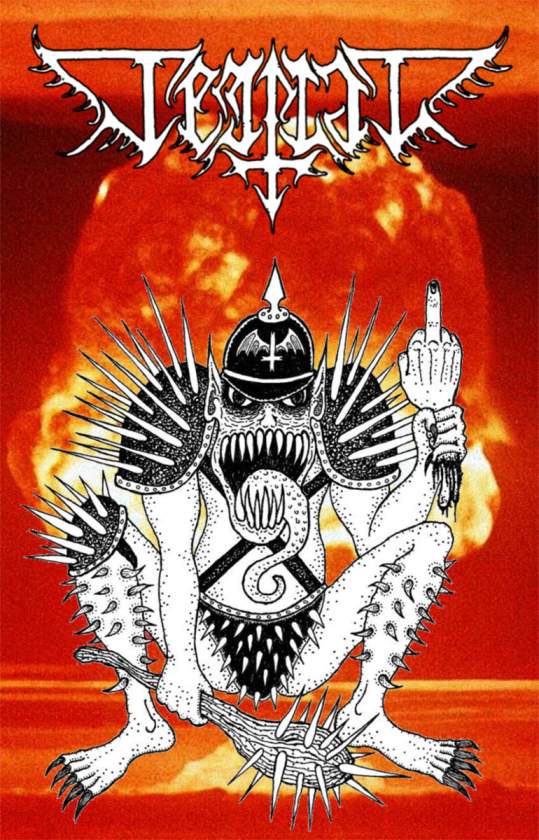 Black/Thrash, man! You know the drill. Leather, bullet belts, and beer, a lot of beer. Now please imagine a post-apocalyptic future of the nuclear Road Warrior variety. In this not too distant future four irradiated maniacs found some batteries, a working boombox, a pallet full of cases of beer, and a few tapes by Venom, Motorhead, Sodom, and The Exploited – “Troops of Tomorrow”. With nothing else to go to by what we are presented here is one of the weirdest and most enjoyable experiences I’ve had with a demo in a while.

To clarify, the tape I’m talking about is the remastered demo Caligari Records is putting out, as opposed to the tape Templar put out themselves in 2018. In the remaster the layers are more discernable, however none of the filth and grim have been removed – this is still a dirty aquarium, you’re just able to peak into it a bit better.

If you’re not into raw, unpolished, extreme metal heavy on attitude you’re going to hate this. What may sound sloppy to some, is pure undiluted metal madness to others.

The vocals are puzzling and incredible. Master General and Master Templar share vocal duties and are responsible for the dizzying speed metal riffing on guitar. There’s a serious case of multiple personalities attacking the mic here. I hear a convincing rasp, a random King Diamond falsetto pops up here and there, sometimes this falsetto has a phlegmy/throaty quality to it that shouldn’t work but it works so well. They also throw in some drunken grunts, pained screams and banshee wails, and least I forget the occasional OUGH! (Tom Warrior would be proud).

None of that has any business working together – that fact that it does works, is a true testament to the Finnish quartet’s conviction. I’m sure a lot of beer went it composing, rehearsing, and recording these 5 tracks but I’m also sure that what’s coursing through their veins is pure fucking metal.

The Black-Thrash Metal Punk backdrop wouldn’t hold the crazy vocal performance together if their chops weren’t there to back it up, thankfully they do. The guitars are fast, razor sharp and sometimes melodic with many catchy riffs throughout. The drums hold everything together but just barely, constantly making it seem like things are going to come off the rails, yet they never quite do.

I can’t help but think that Yasuyuki of Abigail digs this tape. Overall, we have 5 songs under 20 total minutes. Highlights for me are “War Lesbians” for all of the weird and awesome vocals and speed, and “Renegade Templar of the Radiating Deserts” for cool guitar work – this feels like their most developed composition. (International Acrobat)