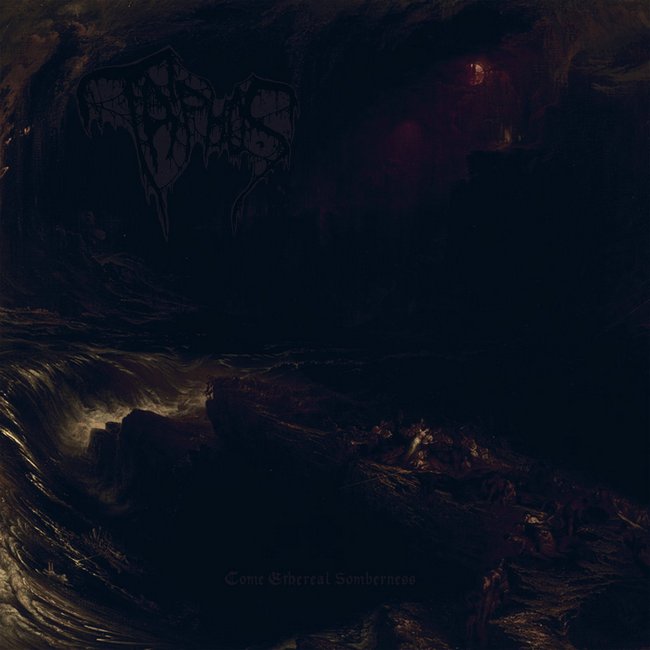 I’d heard of this band, I was told to listen to them a thousand times, and yet I chose not too. To much other great shit out there, fuck you buddy your opinion is that entirely, an opinion. “Listen to Taphos” they said. Long story short, that story is something that will get told in due time. End of story they were right. Taphos, I salute you. After a demo or two, both of which were released later on on the one album, these purveyors of heavy shit must have sat around and thought to themselves, how can we make it even more fucking evil, a bit faster, and a bit more like several hammers to the face.  Well, guess what, hold my fucking beer they said, and the result is here for all to see. “Come Ethereal Somberness” is a very misleading title to say the least. Well. okay their may be one or two moments of peace (Three actually), but the rest of this thing aims to clearly kick your nose in and pull both ears off, and possibly shove them somewhere where the sun fails to shine! It also contains probably one of the finest intros into a Death Metal song that I have heard in a long time. Yes, ladies and Gentlemen I give you track 3, “Thrive In Upheaval”. FUCK YES! Those Death grunts are enough to stop any Tom G Warrior wannabe at ten paces, and then did I say pace? Holy shitballs this thing moves along like a fucking freight train packed with pure malice! From the pounding of the drums to the absolute riff mania that follows, your’e neck deep in some serious shit here. Heck, it even slows down for a microsecond to allow you to absorb the punches, then dips down to groin level with a monstrous bass line, then follows through with an uppercut that just leaves you lying on the floor a sobbing mess. The album does not come back to this level of fuck you for mine, but indeed the rest of it is still classy brutal brilliance. Track 5 “A Manifest Of Trepidation” is just that, an interesting build into a song filled with dread. The moments of sombreness come via small pieces of instrumental wonder that could be clearly on an early Morbid Angel piece, and serve only to suck you back into the harsh reality that is Taphos..“Insidious Gyres” is a pure example of a band that has been paying their dues, and respecting their influences. “Livores” continues this, yes they said, hold my beer, and I for one am right with them. I maybe should have listened earlier when told of such brilliance, but I did not. Now they have my full attention. Listen to Taphos. Yes indeed. (Andrew)