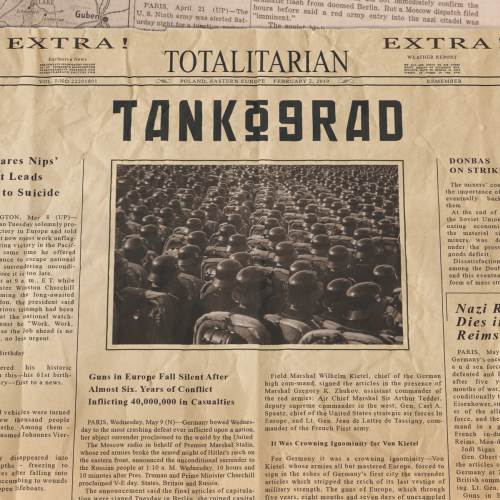 Modern Doom is turning into a murky puddle where more and more bands are just borrowing ideas from one another. Maybe that’s why some exceptions shine even brightly, but maybe they’re really that good. While Poland is turning into a metal hot bed, with more and more Black Metal acts reaching out into the world, Doom Metal is not something to expect from there.

Tankograd (‘City of Tanks’ if that will help you understand the story later on) are a young Polish Doom M etal band (formed in 2015) and “Totalitarian” is their debut full length. A single glance at the cover will explain the album is about to take you to a time in a not so distant history, where things were very much different than today.

The stellar and very original (as in ‘not just revorking other peoples ideas’) instrumentation is giving away an absolutely massive sound, the Doom Metal is layered with hints of sludge, stoner rock, blues and even a bit of that certain Polish black metal riffing, mixed with exceptional vocal work that ranges from forceful to somber to accompany the instruments and helps to build up a dark and gloomy atmosphere. Very emotional record which is talking about the past, but it will be remembered in the future. (Black Mary)