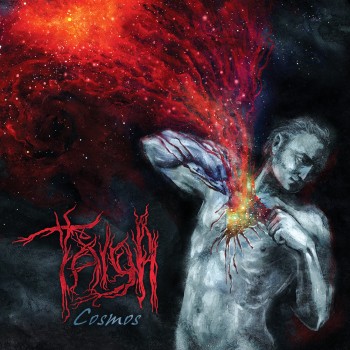 Depressive Black Metal was and is always a difficult genre for me to enjoy. Sometimes it is just boring riffs and pure whining with lo-fi thin sound and sometimes it can capture the melancholic beauty of desolation and despair. But still, the vocals are the “make or break” factor for me in this particular style. Screaming like a mentally ill patient is one thing, convincing the listener you’re really going cuckoo for Cocoa Puffs is something else. Taiga from Russia has released quite some EPs, singles and full-lengths before “Cosmos”, their 4th album. When we talk about the music, this is certainly the right Depressive Black Metal for me, long stretched melancholic yet melodic riffs and song structures, pace changes and all accompanied by subtle keyboard parts. For instance a track like “Космос” just has a great build up towards a certain repeating climax-riff, that it deserves to get hit by the “repeat”-button. Frankly, it is a very good album, only the sobbing almost howling vocals are not the right one if you ask me. This album deserves better than the vocals of someone who is in the next room and is crying that the door is locked and the wouldn’t let him in. Actually, it almost sounds like that…like Nikolay Seredov (multi-instrumentalist of Taiga) was in the next room, screaming through the keyhole when he recorded the vocals. So the atmosphere, the riffs, keyboard…everything except for the vocals is absolutely decent on “Cosmos”. (Ricardo)