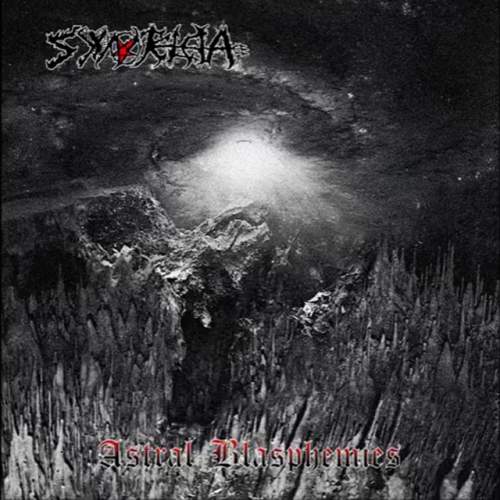 Synteleia is a relatively new band from Athens, Greece and ‘Astral Blasphemies’ is their debut demo recording. Their sound is 100% pure Hellenic black metal as it was played back in the 90’s by great bands such as Rotting Christ, Varathron, Thou Art Lord, etc. What makes Synteleia special is first of all the quality of their songs. Influences from the aforementioned bands are obvious, but Synteleia isn’t just another Greek band which pays tribute to the 90’s sound. ‘Astral Blasphemies’ could have been recorded circa ‘93-‘94 along with masterpieces like “Thy Mighty Contract” & “His Majesty at the Swamp”. Another thing that really impressed me is that the songs on this demo were recorded live during a rehearsal. This fact really helps Synteleia to pass that ‘live’ old school vibe through their music.

“Astral Blasphemies” contains 4 songs of true Hellenic darkness. “Synteleia Has Come” is the opening one and you really get an idea of what to expect as soon as the first riff is unleashed. “Dark Summoner of Yog-Sothoth” is the second and my favorite song. It really made me get up and headbang to its rhythm. All the elements that made the Greek scene so great in the 90’s are there and I really believe this song could have been a classic if it was recorded 20 years ago. “Las Reglas de Ruina” continues in the same vein, with traditional Greek black metal riffs and fast drumming. Final track ‘Missioner of Sorrow’ is a doomy black metal epic song which could have been performed by Varathron in the early 90’s. Lyrics deal with the Cthulhu Mythos, invoking the Great Old Ones, and they really blend well with the music. Production is great for a rehearsal recording and same goes for the band’s performance. Synteleia will satisfy any fan of the Hellenic old-school black metal sound and I believe they can conquer the underground scene the next years. I’m looking forward to watch these guys live and listen to their debut album. (Kostas Paganizer)