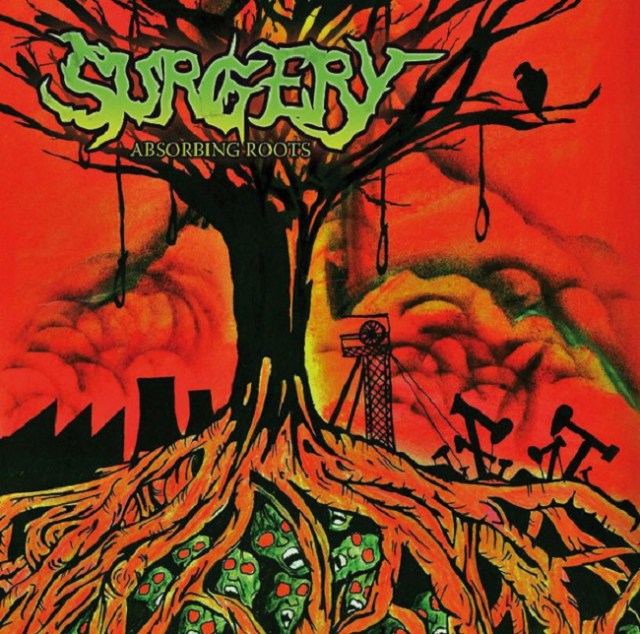 Hailing from Slovakia, Surgery play a very interesting style of death metal that manages to draw from a lot of different corners of the death metal genre but still stays cohesive. While melodic death metal has become something of a dirty word or a way to describe Heartwork era Carcass clones, Surgery manage to draw more from the early days of Swedish melodic death metal like what you would expect from Wrong Again Records and combine that with the midtempo stomp of say a band like Entombed. The style is hard hitting and emphasized by a really powerful rhythm guitar sound. Call me crazy but at times it reminds me of Hatebreed mixed with Entombed during some of the chunkier sections. The vocals are mainly a roar that has an overall British feel to it. Reminds me quite a bit of Dave Ingram at times until it gives away to a high pitched scream used throughout the album. The vocals are definitely what keeps this rooted in the death metal genre. You don’t have to worry about any clean vocals here. My main problem with this album is the overall songwriting. These type of songs really scream out for a big epic chorus to really make each song stand out and come to life. This is noticeably absent from the album. “Hands in Chains” and “Mental Demise” are the two standout tracks as far as memorability goes and the choruses really stand out on those two.My favorite song of the album though is “Grime.” It combines some excellent thrash sections, killer melodies and a great flow. The band most definitely isn’t bringing much new to the table. That said, sometimes you want to listen to something that won’t bring you any surprises but provides adequate riffing for headbanging purposes. This is a straight forward, energetic album that shows a band trying to find it’s footing within the death metal genre. My interest is piqued and I’m definitely looking forward to album number 3. (MikeH)