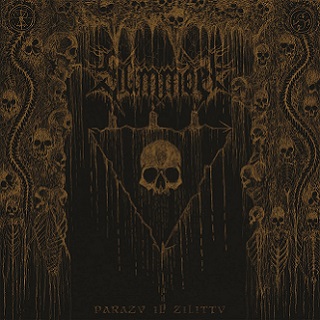 A newer spawn from hell ,or Portugal to be precise, is coming our way with their debut album called “Parazv Il Zilittv”, which is going to be released through Iron Bonehead Productions. Vocals evoking giants from deep down below, drenched in reverb from hell. This something for the wicked. Musical wise a good mix of Antiversum, Grave Upheaval and Impetious Ritual with a still audible guitar sound. Heavy riffs dragging like dead corpses on the sea, slow paced mostly with some occasional faster eruptions that turn into cacophony towards country neighbours Spain, namely Altarage madness in those sections. To me sadly they never reach the aforementioned bands in any way, but come a step behind them concerning atmosphere, chaos, and innovation. There is definitely potential and I think there will be improvement in the future, nonetheless, a good debut album. (DPF)