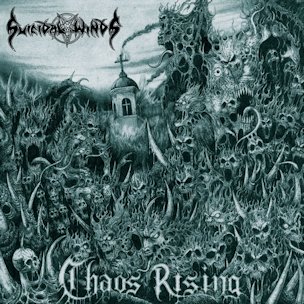 This is the 15th release (including the demos) of this long-running combo and after co-operations with labels as No Colours Records and Agonia Records, this is the second album (first studio album) released by Pulverised Records. Although Suicidal Winds isn’t a newcomer in the scene, they aren’t quite well known.

Too thrashy to claim the black metal label, too black to compare it with…let’s say Desaster. Too black/thrash to be 100% death metal. And there is the old Celtic Frost vibe which is present during the hymns of Suicidal Winds. Compromise: Old school extreme metal to the bone! Nothing complex or earthmoving, but not utter bluntness either. These Swedes prefer their tracks a bit short, at high pace with an occasional melody here and there. Only the track “Ballade of Death” is a bit different, the title says enough.

If you consider Scepter and Usurper as fine bands in your collection, “Chaos Rising” can be a nice addition. No, you still don’t have to run to the local record store, but when you are walking by and you already had in mind to listen to some new albums, take this one along. (Ricardo)