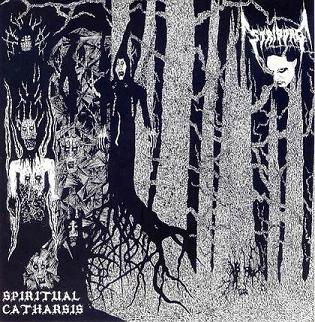 Striborg`s “Spiritual Catharsis” has now been re-released by Satanath records too. The dark chaotic path of “Mysterious Semblance” continues with “Spiritual Catharsis” which has some morbid melodic parts in instrumentals and and non-instrumentals, but work in a more twisted chaotic manner compared to the previous album. The entire material is more ferocious and even less accessible than before, making this album even harder to digest, something you can apply to every Striborg release. The drumming is more varied and has faster components, giving it a more brutal approach. The disturbing keyboard sounds are just the pinnacle of morbid dreams you can`t escape from, something which works in the favor of his compositions. Both albums work perfectly alone, but I managed to listen to them in a row which works totally. Nothing for an occasional spin. Only for those who wish to drown deeper into the dark realms of spiritual catharsis. (DPF)