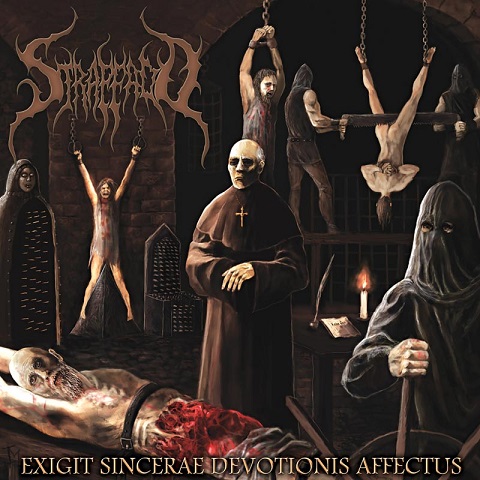 Strappado. noun. A form of punishment or torture in which the victim was secured to a rope and made to fall from a height almost to the ground before being stopped with an abrupt jerk.

Strappado are a Brutal Death Metal band from Madrid, Spain and “Exigit Sincerae Devotionis Affectus” is their debut album from Comatose Music. Ten tracks detailing the intricacies of torture that clock in at just under 30 minutes. Strappado play a straight forward style of Brutal Death Metal with full speed ahead low-end guitars, relentless blasting drums and guttural non-descript vocals that sound like a death rattle. Going straight for the throat and coming out very strong with high energy heavy riffs combined with some clever slam parts mixed in with old school brutal death riffs, there is a simplistic approach to the bombardment being leveled upon the listener. Unfortunately they lost my interest about half way in. There just isn’t very much variety in the riffs and there is hardly any variation in the speed of songs. Although the riffs are brutal and fast I think if the song writing had better composition and some slower passages thrown in, this would have been a more interesting listen throughout the entire album instead of tapering off at the half way point.

“Exigit Sincerae Devotionis Affectus” is a decent debut album and Strappado are a very competent group of musicians, I hope that their next release will be a more varied and better composed assault. (Ted Gloom)